In this series of guest posts, Dubai-based educator and VR pioneer Steve Bambury reflects on the journey to integrate the HTC Vive at JESS Dubai over the last three years. In this final part, Steve shares some of the projects he helped to coordinate throughout 2018 and 2019.

Click here to read the PART I of this series>>

Click here to read the PART II of this series>> 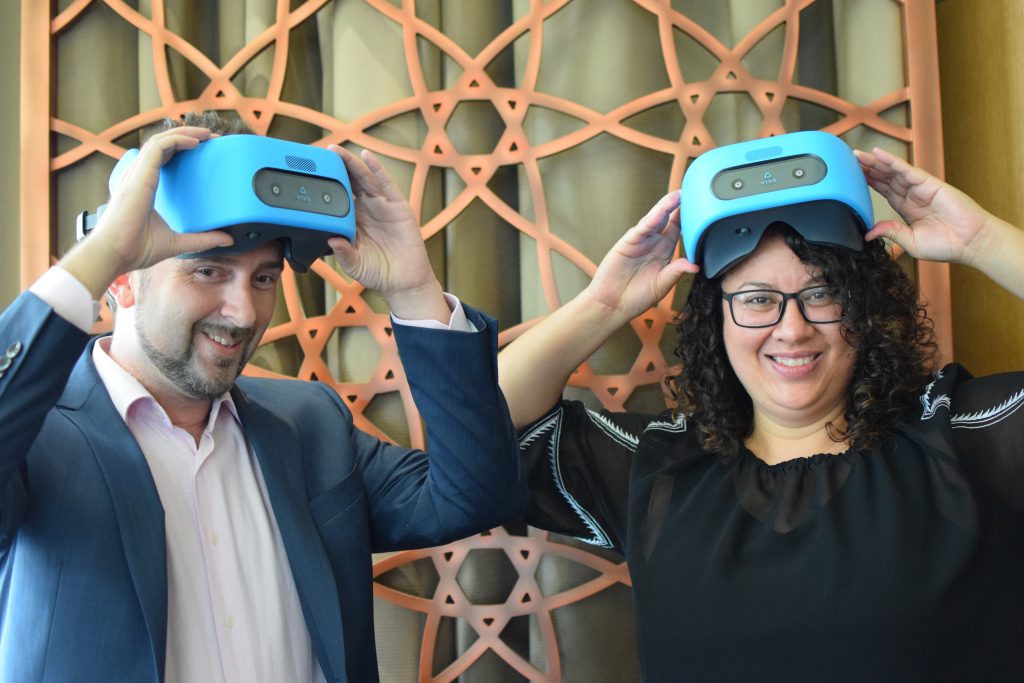 So in the first part of this series I talked about some of the initial trials we ran with the HTC Vive at JESS Dubai back in early 2017 and in the second part I focused squarely on the development of the VR Art program using Tilt Brush. For this final piece, I wanted to share some of the other projects I spearheaded during the 2018-19 academic year, before I left JESS to set up my own consultancy.

Before we talk about some of the projects though, I wanted to share a little insight into the logistics at the school at this time. In May 2018, at the request of the director Mark Steed,  I audited our VR hardware and usage across the schools (two primary schools and a secondary school) and made the recommendation that our HTC Vive headsets were consolidated into the secondary school rather than spread across all three. The Common Sense Media report on VR and kids had recently been published and there were a few rumblings about using the HTC Vive with younger students but ultimately the simple fact was that the Vive was not a comfortable fit for younger students and the majority of experiences were not aimed at them. So we moved all the original Vives into the secondary school and kept the mobile VR headsets (Viewmasters) and a couple of WMRs in the primary schools. In turn this gave us more hardware to use in the Secondary school which was great.

Also in March 2018 I got hold of an original HTC Vive Focus, directly from China with the help of the wonderful Paola Paulino and the one and only Alvin Wang Graylin. Despite an initial lack of English language content, I began looking for opportunities to harness this in the school too. Later in the year I would complete my personal Vive trilogy with my first HTC Vive Pro which again was soon being trailed with some lucky secondary students.

So let’s take a look at a few of the projects I coordinated in this period.

To this day, the Ramadan VR project is one of the biggest VR projects I have coordinated. Seven types of headset, seven different ages of student (from 4 to 17) and sevem different experiences linked to the holy month of Ramadan, which is of course a hugely important event here in Dubai. Both the Vive and Vive Focus featured with the VR Cube app used on the Focus to build the Kaaba Stone and the project climaxing with the school’s head girl using Tilt Brush to create a stunning Ramadan greeting made of fire and light. Also in the mix was the very first trial with the experimental Vive Paper. Students used the Canva app to design a Ramadan-themed book and then imported this into Vive Paper to create a unique virtual book, triggered by turning the physical pages of the Vive Paper. It really does have to be seen to be believed!

Inside the heart and lungs with Sharecare VR

This was the first time I used the HTC Vive Pro with students and was part of a Year 11 GCSE Biology class. Sharecare VR was used in parallel to some hands-on practical experiences (ever seen a goat’s lungs inflated?) to help the students get a better understanding of how the heart and the lungs function. What really elevated the experience is the way Sharecare allows you to apply different diseases and conditions to the organs and see the impact. This was both fascinating and eye-opening to the students and the clarity offered through the Vive Pro was stunning. You can see a short clip from this session below:

Becoming a Tree in virtual reality

This project was coordinated with the JESS Eco team run by some Sixth Form students and used the incredible Tree VR app to let them become a tree – from seedling to the top of the canopy – before experiencing deforestation first hand. The question was “can you feel empathy for a tree?” and everyone who went through this amazing experience seemed genuinely affected by it. I just wish we could have delivered the full, multi-sensory experience that the Tree VR team were touring round festivals after it launched as that sounded unbelievable!

Sadly I did not have the ability to capture this session with the students on video but below you can watch my own full playthrough, complete with commentary, from my YouTube channel.

Taking Arabic into VR with Mindshow

This project was not with students but with a member of staff – outstanding Arabic language teacher Samah Aldarweesh. Samah was working with the KHDA (the education wing of the Dubai government) on a YouTube channel project to create some fresh, engaging Arabic content. She asked me if I had any ideas and we decided to use the amazing Mindshow platform to create a short animation to cover some of the vocabulary from a unit about food. Mindshow’s unique motion-capture style meant that Samah could share her expertise and enthusiasm in a way that would never have been possible before VR. Take a look –