We can’t believe it’s been a year since the HTC VIVE launched and can’t wait to celebrate Vive’s first birthday with you. We’re leaving the smash cake at home and are instead dropping freebies to say thanks to all of our year one customers with:

Stay tuned to the Vive blog for more. We’ll have views from developers and Vive execs as we put a book-end on year one and get a running start on year two.

For all the details, view the press release below. 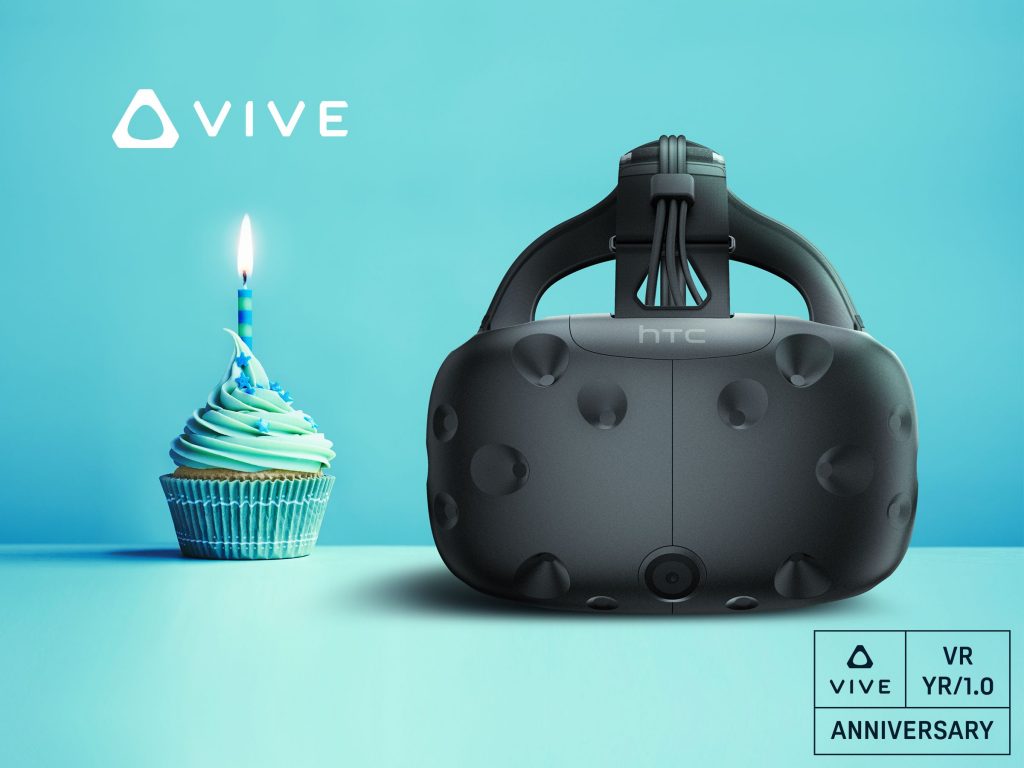 “We’re surprised every day by what our fans and developers have brought to VIVE in its first year,” said Daniel O’ Brien, GM US, HTC Vive. “We’re astounded by the impact that VR is making in the home and in the enterprise, and we want to celebrate Vive’s first birthday by giving a bit back to our fans and by introducing Vive to more people.”

Making the first Vive Day one to remember is the launch of Viveport Subscription. On April 5, the service will introduce a new way to navigate the hundreds of apps currently available on Viveport. Viveport Subscription customers pay $6.99 a month and choose five titles from an ever-growing library of curated content. They get unlimited access to the apps they choose or they can rotate out their selection every month. All apps in the subscription service are also available for sale, letting customers try an app before they decide to buy.

For developers, the subscription model represents an additional revenue channel and a way to reach broader audiences. Viveport Subscription is launching with more than 50 titles available including must-experience VR apps such as TheBlu, Richie’s Plank Experience, Everest VR, Fantastic Contraption, Mars Odyssey and more. Vive owners can take advantage of the free one month trial of the service by registering now at www.viveport.com.

“The marketplace for Vive apps has grown at a tremendous pace with more than 1,600 titles now available across different app stores and over 30 new apps launching daily,” said Rikard Steiber, President of Viveport at HTC Vive. “The rapid growth of the app market is a win for VR overall yet it can present discoverability challenges that affect both customers and content creators. Introducing a subscription model to VR is a natural evolution of where this market is going, and as film, music and TV have proven it’s becoming the preferred way customers want to explore and experience entertainment content.”

Arcade Saga and more
It’s not a birthday without gifts, and Vive Studios is giving back to Vive fans for a great first year. On April 5, all year-one Vive purchasers can redeem a free copy of Vive Studio’s fast-paced VR action game Arcade Saga, a $19.99 value, on Viveport.  Developed by HTC’s internal studio 2Bears Studios, Arcade Saga has three distinct game types – Smash, Bowshot and Fracture that take inspiration from pinball, table tennis and archery, and add the physics and physicality of VR. Each game type has head-to-head online multiplayer and a campaign mode with 84 levels to master and massive, room-scale busting boss fights to overcome. To take advantage of this one day offer, visit Viveport.com or the Viveport desktop application on April 5.

Visit the Vive Blog for more on April 5th, including developer interviews, free downloads to mark the anniversary and more.