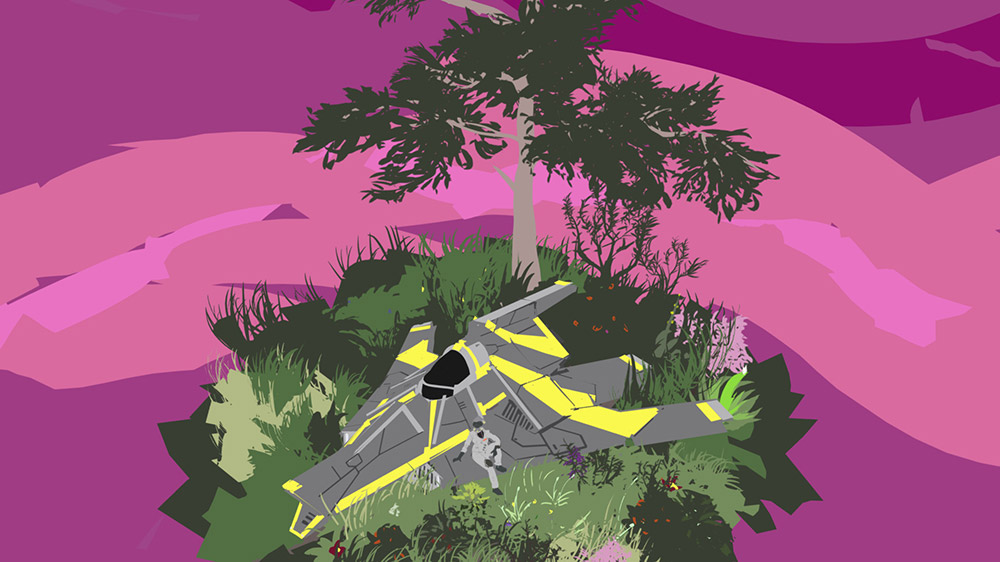 Creation in virtual reality is a bold new frontier for art, and it takes a brave artist to venture there. With Tilt Brush now available on Viveport (and in Viveport Subscription), we spoke to VR artist Liz Edwards, perhaps best known for her work in Google’s groundbreaking VR app.

Before becoming known for her VR work, Liz worked as a character artist for Creative Assembly, working on Total War: Warhammer (a gallery featuring that work is here). Since then she’s been featured on Sketchfab and UploadVR as their ‘VR artist in residence’. We asked her to remove her headset and exit virtual reality to talk to us.

Which came first – your art, or your art in VR? 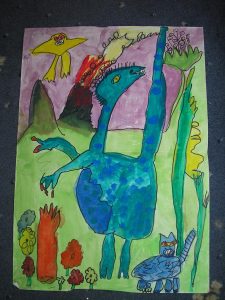 My art came first! I’ve been making art since I was a kid and I never stopped. I may have peaked in the 90’s with this Jurassic Park inspired piece (see left) but I’ll never stop trying.

Making art in VR feels a lot like making art as a kid again – it’s such a new medium. There are no rights or wrongs and very few people have done it before the release of Tilt Brush so it’s all experimentation. Everyone working in VR right now is a pioneer and I’ve loved seeing this brand-new medium evolve!

What was your first experience in VR?

My first experience in VR was the Aperture Science demo! This was at the HTC Vive VR Game Jam in London in 2015 – Chet Faliszek kindly ran the demo for us and didn’t seem too bothered when accidentally hit him – I think! – with a controller.

It was like nothing I’d ever experienced. I’m a huge Portal fan and it was honestly kind of overwhelming for my first VR experience to be this room-scale jaunt into Aperture Science. I actually took the headset off 90% through the demo because it was so intense. I’ve been playing video games since I was a little kid and I’d never experienced anything close to that. It definitely stuck with me.

I did go back later and see the demo through to the end!

When did you first get to use Tilt Brush? What was your initial reaction?

I didn’t get to try Tilt Brush until my own Vive pre-order arrived. I was kind of excited for the idea of being able to make art in VR but it wasn’t clear what that actually meant. I bought my Vive to play games with and my first reaction to Tilt Brush was just kind of, “Huh, cool.” Then I went and played around in The Lab some more!

The first thing I did in Tilt Brush was draw a giant tongue on the snowman (see it in this tweet).

The first time something clicked was a couple of months later with this sketch (see GIF, right). This was the first time I tried to draw a head in three dimensions.

I experimented a bit more and soon came up with the final sketch, below (and here is the 3D sketch).

That sketch was the first time I felt like I was really onto something! 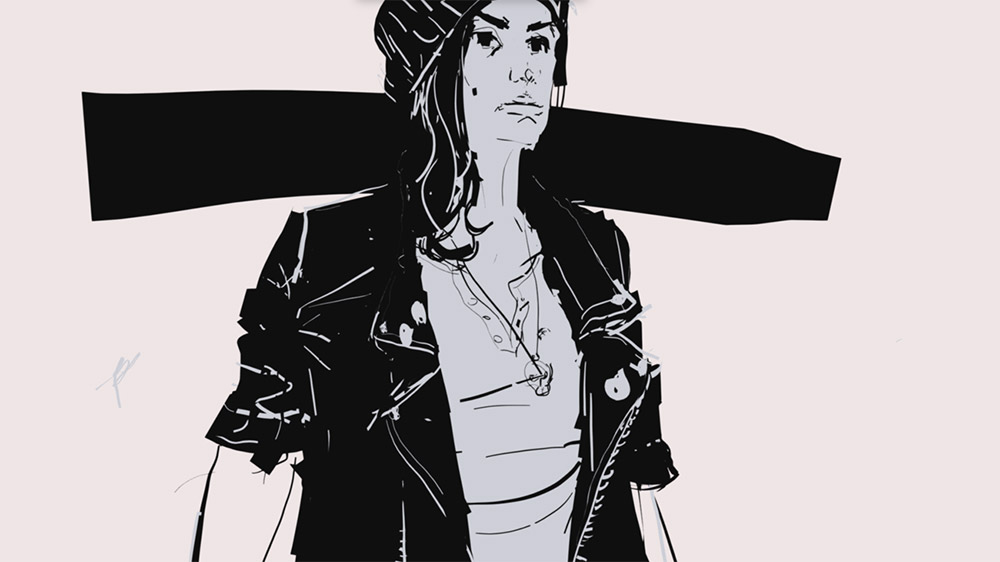 Take us through a typical process for creating something using Tilt Brush. Do you plan in advance in any way, or jump right in? Are there specific settings you use for creating?

I don’t tend to do any planning outside of Tilt Brush. I’ve tried to do some 2D concept sketches from time to time but it always felt counterproductive planning a 3D piece of art in 2D. I much prefer to start out by doing a few loose sketches in Tilt Brush itself and working on top of one of those.

I usually use the same 3 or 4 brushes for my Tilt Brush work – the three Marker brushes and the Wire brush. These are all unlit brushes so there’s no light or shadow, just solid color. I found that those gave me the most control and I could create the illusion of solid objects.

I actually uploaded a series of sketches showing my process in Tilt Brush recently. You can view all these sketches in your browser or load them into Tilt Brush: https://vr.google.com/sketches/user/7IavmowTkhF

How do you usually ‘display’ your work in Tilt Brush? (Outside of the headset and a personal tour!)

Sketchfab have gone out of their way to support Tilt Brush art and artists from the very beginning. It’s such a great way of displaying art made in VR to anyone in their web browser, both in 3D and VR and they do so much to promote the medium and the artists. I know my VR art wouldn’t have got anywhere near as much traction without their platform!

I’ve recently joined Sketchfab’s ‘Masters’ program where I’ll be giving back to the community by creating VR tutorials and more.

What has been the biggest challenge in creating with Tilt Brush?

The biggest challenge was that first hurdle – taking Tilt Brush from a fun thing to mess around in to figuring out how it can be used in a more professional context, and where that art stands alongside traditional 2D and 3D work. I’m still figuring it out.

What are your favorite Tilt Brush pieces you’ve created? Can you take us through your thinking on them? 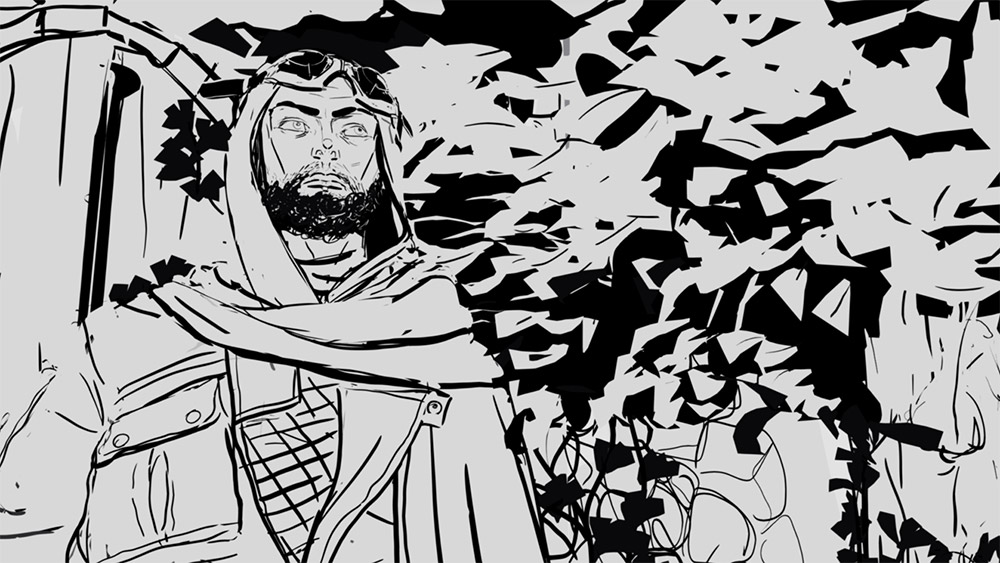 The Explorer piece (above) was the first piece I made afterTilt Brush introduced the ability to scale your sketch. Previously you could only work 1:1 – what you draw is what you get! I’d tried to draw full scale characters before but could never see the top of their head, and things like trees or tall buildings were out of the question.

I was able to sketch this character out the size of a doll then blow him up to human scale to draw the details. I wanted to see how far I could go with scale so I sketched an environment out around him! It was very cool drawing a wall towering above the character and then being able to stand on the wall and look down below. I ran out of steam long before I ran out of space for the environment. 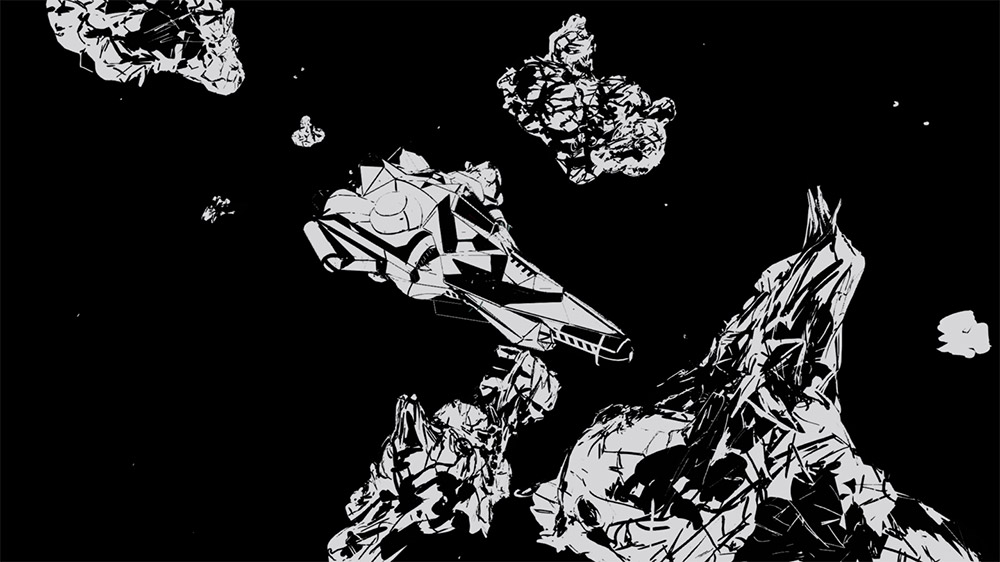 I drew the Asteroid Field piece (screenshot above) after another update where they added guide shapes to Tilt Brush. These are simple 3D shapes you can scale, place and snap your brush strokes to. It was previously kind of impossible to draw circles and cylinders freehand so these guides were hugely appreciated. I tested them out by drawing this spaceship – something I wouldn’t have been able to do before. I’ve never been much of a hard surface artist but I’m finding making vehicles in Tilt Brush is a ton of fun. I don’t think I can ever get tired of drawing myself a seat in a spaceship and sitting down in it. 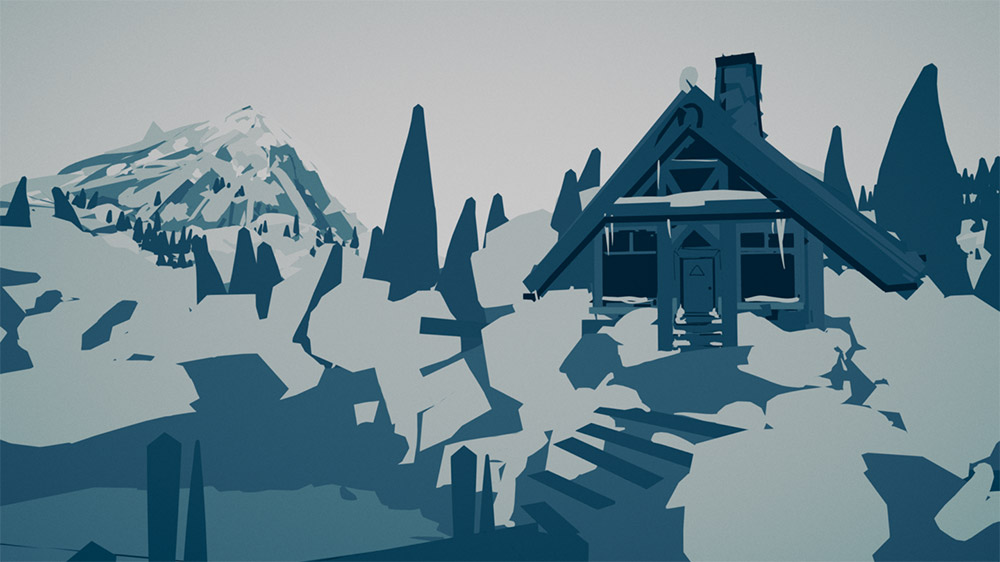 The Mountain Range piece (above) was another experiment with scale but this time much, much further. I started out drawing a huge square filled with snow and mountains. I zoomed in a little and painted some forests and roads, then zoomed in even further and drew a house, a fireplace – a kitchen sink. It could be bigger, it could have more detail, but I had to stop somewhere!

For you, is Tilt Brush similar to any other artistic medium? Do you tend to define it as ‘painting’ or something else?

It’s difficult to define. The way I work feels closer to drawing with ink than it does painting or sculpting but if we’re talking about Tilt Brush’s wilder brushes – fire, reactive to sound etc – there’s no comparison.

Photoshop has layers, filters and so on that make it unique. What’s unique about Tilt Brush?

What sets Tilt Brush apart from Photoshop and the like is that it’s in VR and takes advantage of tracked hand controllers. You work directly in this 3D canvas you can walk around like it’s real. The art is this solid and tangible thing.

How much do you take advantage of room-scale with your Tilt Brush creations?

I do my best! I had to use Tilt Brush seated for a few months and I definitely felt like I’d lost something. I absolutely recommend that people view VR art in room-scale and physically move around it!

Do you use any other VR apps to create art – sculpting or CAD creation, for example?

I use a few! I love to draw and paint in Quill, and Medium is absolutely fantastic for sculpting in VR. I’ve been dabbling a little with Gravity Sketch too which is a completely different beast. Every VR art is different to the next with very different strengths and weaknesses.

What’s the one feature you’re desperate to see added to Tilt Brush?

Finally, do you have any hints or tips for anyone new to using Tilt Brush?

Remember, you have three dimensions to play with! Move around your art as much as you can and make sure it looks cool from all angles. Experiment and have fun!