We sat down for a Q&A with Annie Eaton, CEO at Futurus, a futures technology company, to discover the useful ways they are currently utilizing virtual reality and the VIVE trackers.

Can you tell us more about what you do at Futurus & what you’re currently doing with the VIVE & it’s trackers?

Being a part of a revolution is not something we, at Futurus, take lightly, so when we received our Vive Trackers from HTC, we got to work.  Our company focuses on the more practical, business-minded use cases of VR to begin with, and our first instinct was to find useful ways to solve problems with the technology.

Once you received the VIVE trackers, what were some of the first experiments you conducted with them?

Right out of the box we attached a Vive Tracker to an Xbox gun. It was a controller our CTO had lying around his house and we thought it would be a fun, first experiment (probably the least practical thing we did).  In anticipation of the Vive Trackers’ arrival, he created a simple shooter function in an existing Unity environment. Much to our surprise, we opened the box, screwed the tracker on a handmade mount for the gun, and it worked. The most incredible part of that day was tossing the controller. We took turns wearing the Vive and throwing it to each other. Catching it was mind blowing and for working in the VR industry the past several years, one of the most exciting things I’ve witnessed. 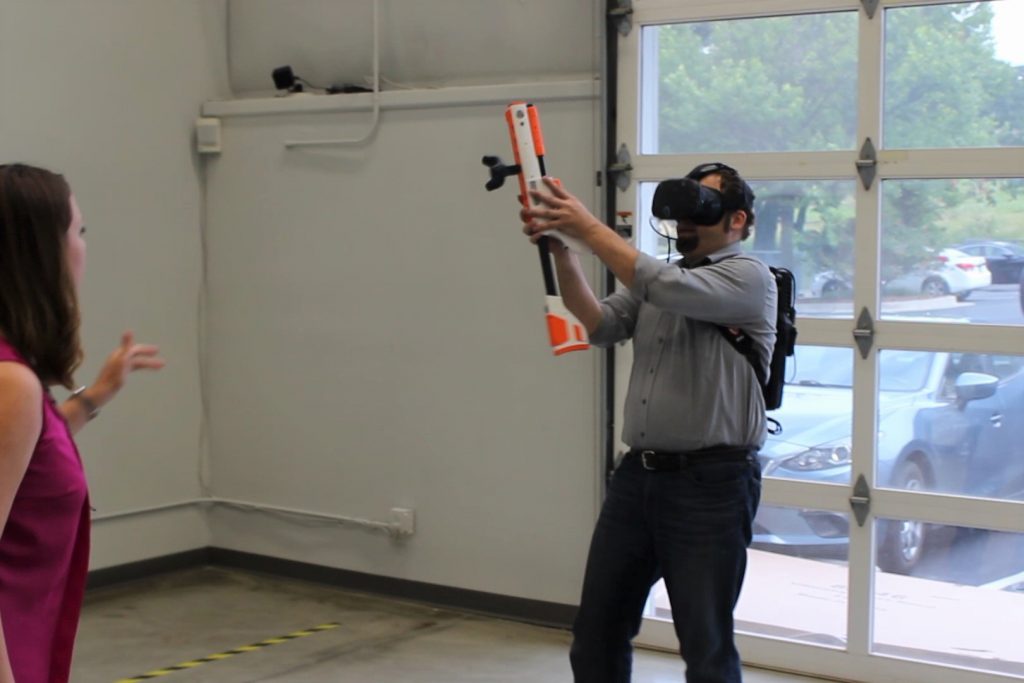 As we moved on to more practical ways we’re implementing the Vive Trackers, we thought of chairs. If there is ever an experience where we want to sit and stand while still engaged in an experience, it can be tricky.  We either have to break the immersion and temporarily lift the headset, or we have to use the pass through camera feature which requires we leave our virtual environment temporarily for the menu. So we decided it was time to add a Vive Tracker to our office chairs. The ability to sit in a rolling office chair while completely blind to reality is such a convenience. With more integration of everyday conveniences, we see VR usership rising as a whole. 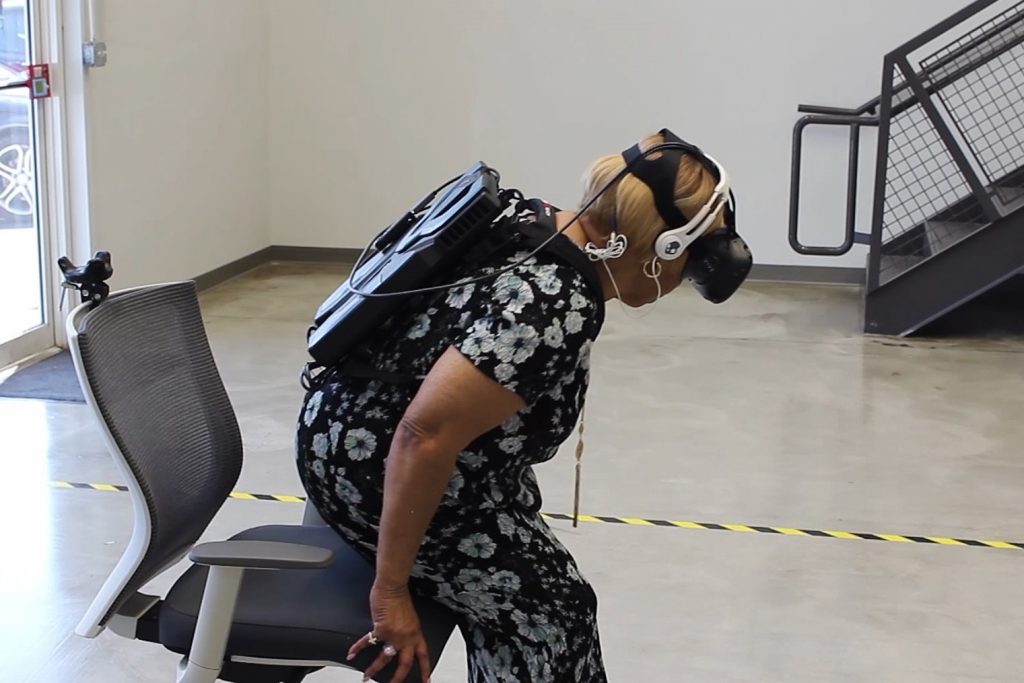 We also understand that you utilized the VIVE trackers to run an experiment on quite an unusual situation. Can you tell us more about that?

Well, it would help if I didn’t have a constant fear of tripping over my pets when immersing myself in VR. So, I wanted to use the Vive Trackers to help visualize my dogs.

My dogs are small and fast and love to stand under my feet. I’ve gotten used to this while cooking, doing my makeup and walking around my house, but they do not understand VR like we do. They do not know that I am walking around blindly which can cause issues. We attached the trackers to their jackets and instantly I could see them floating around in space, but we needed a better way to visualize them.

I am particular about how I perceive real world objects in VR. I actually do not like having arms because they are never my arms. Or if I do, I want them to be more abstract than the recreation of the human arm. We ended up going that route with a more abstract representation of the dogs, floating dodecahedrons, and we made sure to include an image of each of their faces to know which one was which. Problem solved! (Or at least started.) 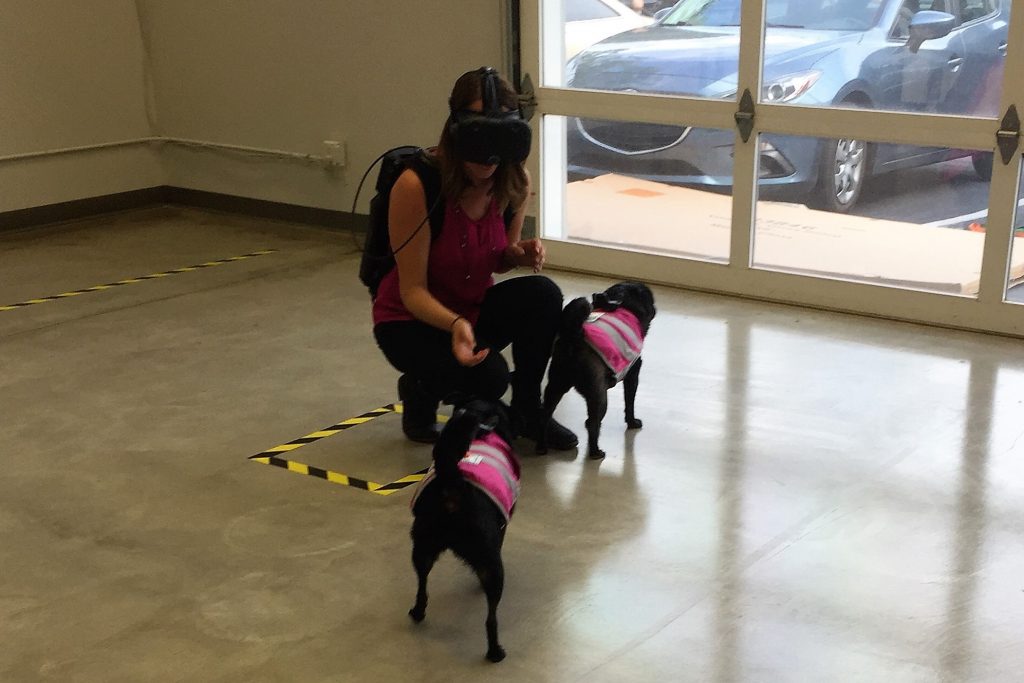 Your team also had people test the trackers out in a retail based layout. Can you explain to us how you went about this & the overall response from the users that took part in the experiment?

Our final experiment was to integrate the Vive Trackers into an existing internal program we have been developing. We have a system in which we test retail layout and packaging in a virtual reality environment. We were able to track every movement by our test shoppers, completely automated by our programming, eliminating human error that exists in traditional focus group testing. But the people who are testing these environments and layouts are not necessarily accustomed to using VR regularly, so we wanted a way to help them transition from the real world.

We decided the best way to do that was to track the shopping cart in VR. We used a tracker to allow the user to push the cart in the environment, giving them a sense of grounding. They still put the items in a virtual cart, but it lines up with the real-world cart and we’ve had positive feedback. Users seem to understand how the process works faster and there is less of a learning curve which saves time in testing.  We have plans to continue exploring and evolving the best use of Vive Trackers with this program. 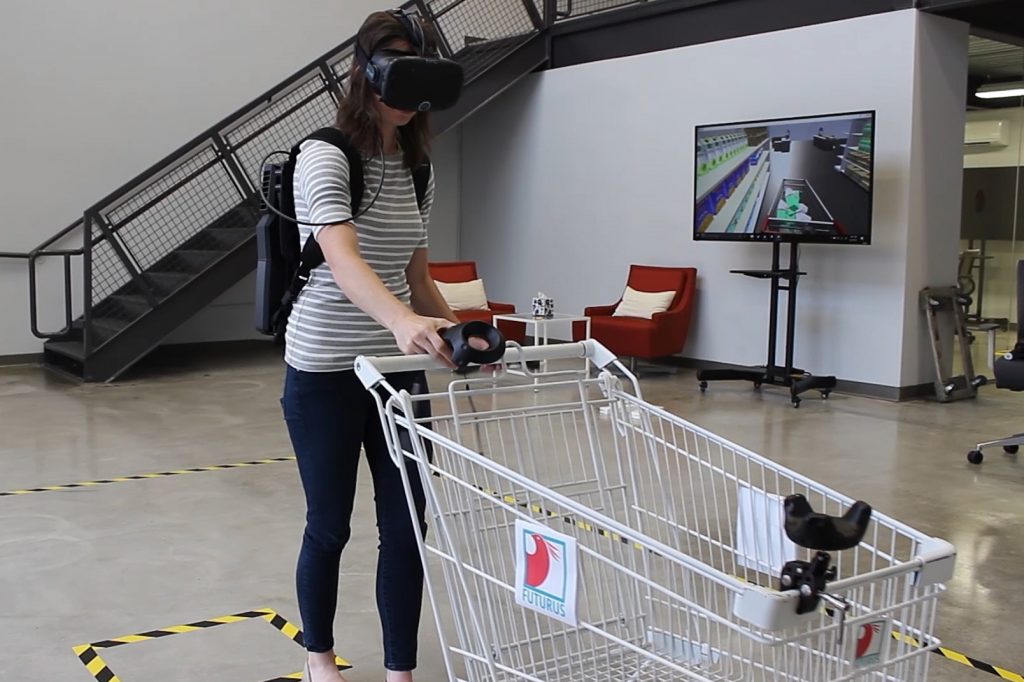 Finally, what is it about virtual reality that has the team at Futurus excited about the future?

There are endless opportunities with virtual reality programming. We see it every day. I love the challenge that presents itself when we must create a compelling and engaging environment. The technology is evolving so quickly that these environments are only going to become more immersive and with tools like Vive Trackers, more interactive as well.

To learn more about what Futurus have done with the Vive Trackers, check out this video: