You asked, we listened, we improved. We’ve been working hard behind the scenes on Viveport and wanted to share news of some fixes, updates and changes we have made to our Viveport desktop client since launch. 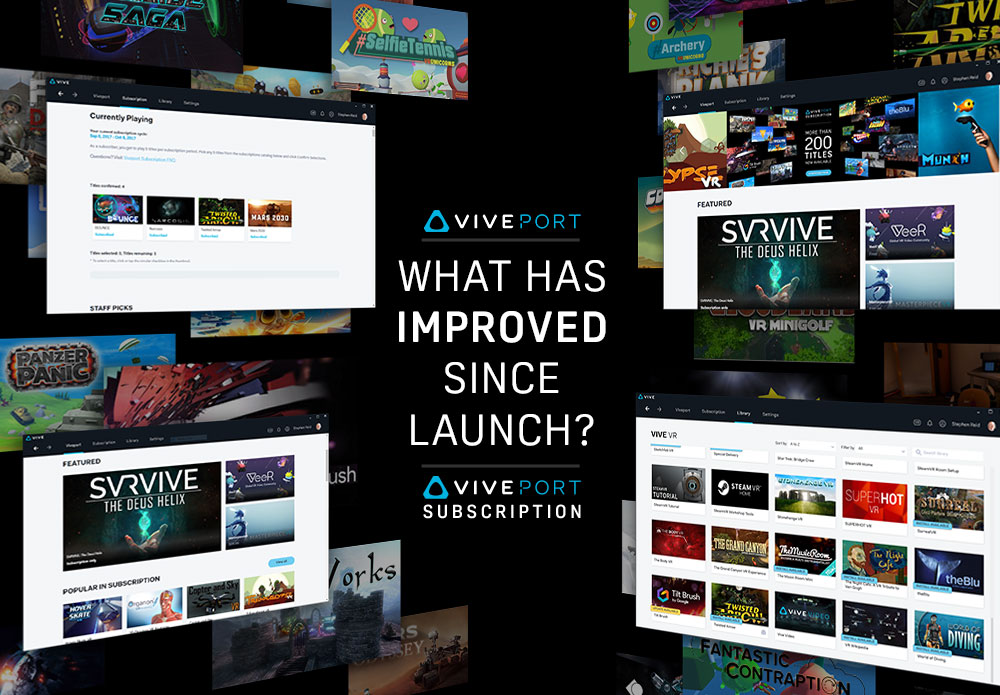 First, some context. Viveport is a brand-new software platform that has been live for less than a year. With all new software projects there are going to be bugs, and Viveport has been no exception. There are other digital software sales platforms that have been available a lot longer than Viveport, so we expect it will take a while for Viveport to catch up to them in terms of features and performance. Our goal hasn’t changed, though – to build Viveport into a great VR platform.

When we launched Viveport in 2016, we had 75 titles. Today we have grown to 1,000 titles in all our regions and we have processed millions of transactions. We have also added some unique features like Viveport Subscription.

While our product and engineering teams work continually to improve Viveport, other teams are monitoring and asking for direct feedback from you. With your help, we believe we’ve significantly improved Viveport. Recently we’ve shifted our development focus from adding a lot of new features, to optimization and stability.

While there have been thousands of changes to Viveport (and you can find highlights here), let’s discuss some of the biggest issues reported during Viveport’s first year of operations – and what we’ve done about them.

The new download backend not only uses multiple CDNs, but it also provides multiple levels of redundancy, as we have incorporated new technology from third parties that are specialized in download optimization. When you download content now, you should see faster download speeds, no matter where you are in the world.

TOP ISSUE: “Viveport takes up too many system resources”

Virtual reality is a challenging task for almost any PC, so having a desktop client occupy more resources than necessary isn’t ideal. You told us that Viveport took up too many PC resources, so we have worked hard to reduce the resource footprint.

The latest version of Viveport now uses significantly less CPU and memory (RAM) while running. This is mostly due to a new and improved client framework launched earlier this summer, letting us reduce the footprint while still adding new features. There are more optimizations coming, but for the moment we are much happier with the performance of client versions 1.1 and later.

TOP ISSUE: “Viveport crashes too much”

This was an early issue that we have focused extensively on in the last few months. No software crash is ever ‘fun’ but it is even more frustrating if it happens while wearing a VR headset. One of our top priorities has been to dramatically improve stability and lower the frequency of ‘crash events.’ In June, we replaced the original crash reporting system with a much better third party system, which has provided far better near-realtime stability info to the team. We can now monitor individual crash traces and determine if issues are with the software, or with specific user systems. As of release 1.1 we have seen dramatic improvements in software stability, though this is still a core focus area for the development team.

We have grown our VR library from 75 to over 1,000 titles in all our regions, in less than a year. However, now our focus is to help you discover great VR content. A brand-new search system is coming in Q4, which will improve your ability to find content.

In addition to more titles and better search functions, we have also launched Viveport Subscription to provide a low-cost, no obligation way to explore new VR experiences. It’s critical to let people experiment in VR since each user can experience different effects from the same VR title.

Given VR is a whole new content type, we felt a subscription option provided the best way to explore new and previously unknown developers’ work. Initially launched with 50 games, Viveport Subscription now features close to 250 titles, and we are adding new titles daily.

Finally, we’ve been hard at work overhauling and improving the general Viveport client experience, from status messages to filters, notifications and in-client prompts. We want Viveport to be easy and intuitive to use, and we have a lot more improvements planned. That’s why we’re not slowing down. With your help, we’ve accomplished a lot in a relatively short period, but there’s plenty more to improve upon.

We want your feedback on Viveport to help us improve. Feel free to talk to us through social media (we’re on Twitter and Facebook) and through our community forums. If you’re subscribed to our newsletter, you’ll see major updates mentioned there, or here on our blog. We look forward to hearing from you as we work to improve Viveport!