Virtual reality can take you to a lot of places – some realistic, some less so. In Island Time VR, developers Flight School dump you on a desert island… with a cartoon crab for company. We decided to strand Adam Volker and Ruby Wang of Flight School on their own desert island to answer our questions.

Hello there! First of all, Adam, Ruby – let us know what you do at Flight School.

ADAM VOLKER: I am a Creative Director at Flight School, and co-Director of Island Time VR. Generally my responsibilities at the studio include coming up with new ideas, and shepherding them through development until release. I get to oversee and assist with everyone doing the actual work of game making! It’s a great job.

RUBY WANG: I was the art director for Island Time VR. As a concept artist at Flight School Studio, I’m responsible for all visual development artwork including character design, environment design and color scripts for our projects. 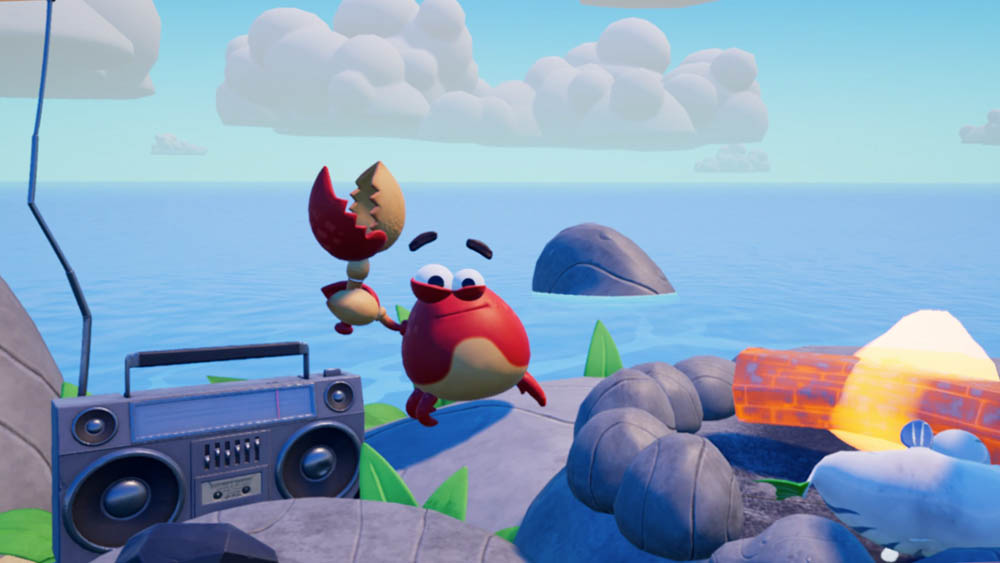 Tell us the idea behind Island Time VR in a small, island sized sound bite.

ADAM: A small island, one friend (Carl the Crab) one goal…survive as long as you can. Rinse, repeat, rejoice!

What came first: the idea of surviving on a desert island, or the idea of making all these fun items?

ADAM: Survival came first. One of our designers, Alessandro Kitchener, was the one who first came up with the island game and worked with a small team to quickly make a prototype. We saw a lot of promise in it and started fleshing out gameplay.

Tell us about Carl the Crab. Is he just there to give you tips?

RUBY: In the beginning, Carl was just a cute animal to keep the player company. Carl’s just meant to be goofy and funny all the time. The more gameplay we added to this world, we realized that we need to give players some guidance in the game. Carl became a little instructor to guide the player in surviving. Other than giving you tips, Carl is so supportive! He is even willing to sacrifice one of his claws to help you make a tool. 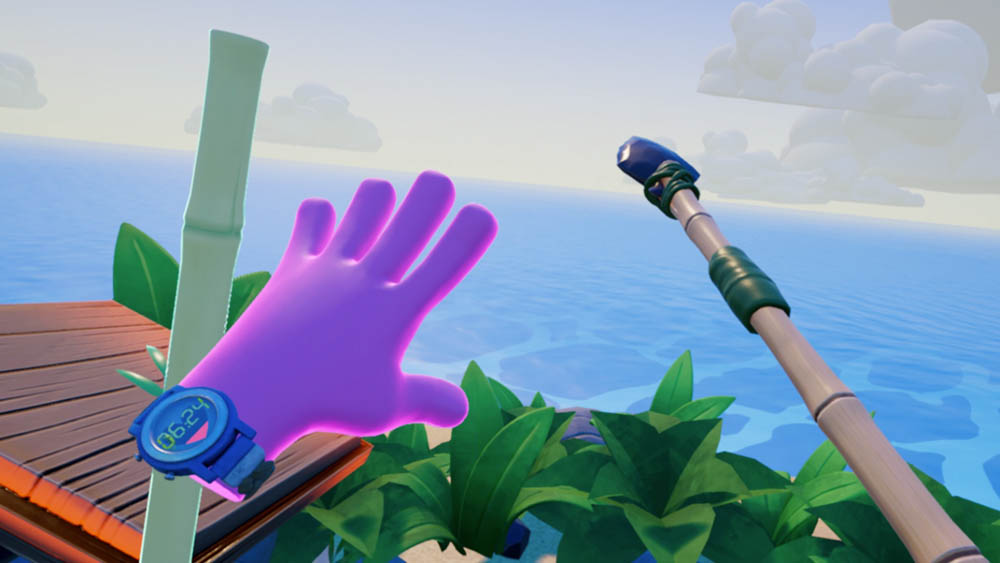 Also, perhaps more importantly, Carl is a crab who talks. Are you suggesting the player is hallucinating from lack of water or food, or is he just a very special crab that only lives on this one island?

RUBY: Carl is a very special crab. He’s the only one living on the island. I personally think he has lived on the island for too long and desperately wants a friend. However, every friend he’s had died too soon after they wrecked on this island. But, he could be your hallucination! Maybe, he is your last optimistic voice in your mind. Whatever helps you survive, right?

Greg Miller of Kinda Funny did a great job bringing this tone to Carl’s voice. For his design, we wanted Carl to be extremely adorable and goofy looking. I designed his round shape to represent his personality and his bright red color makes Carl stands out wherever he is. Carl serves as a happy and optimistic character who will be your lifelong friend until you die (very quickly). 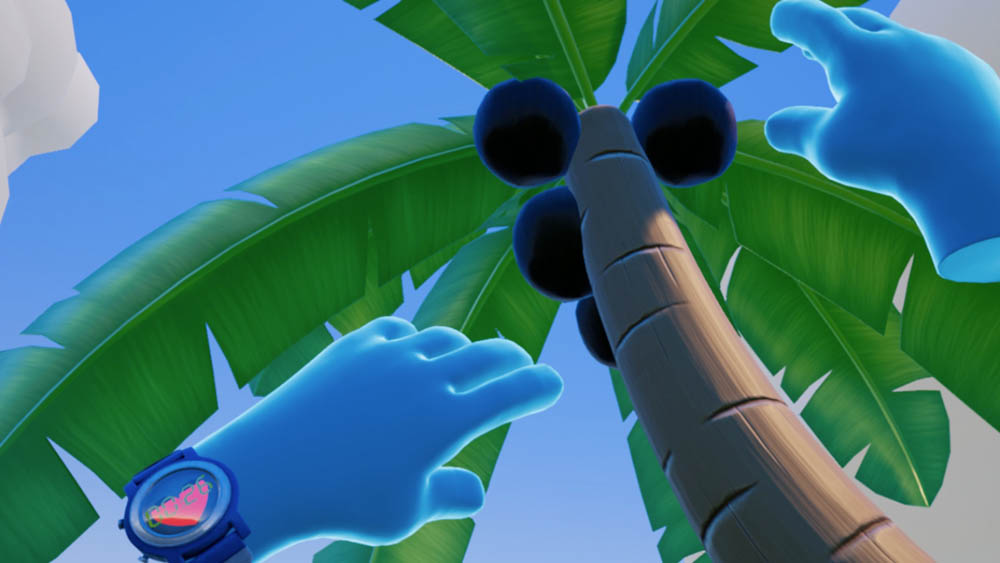 What kind of resources are available to you on the island? Are there any ‘secret’ crafting combinations?

ADAM: Plenty of secrets on our tiny paradise to find. The best resource?? Your….CREATIVITY! But joking aside, there are a bunch of different combinations of things you can make while stranded in Island Time VR. You would be surprised by how many different ways the objects you craft can interact together. I personally like holding onto the spear with the grabby claw. It makes it much longer!

Island Time VR is obviously a pretty big change from your last title, Manifest 99. Do you see these two titles as an idea of Flight School’s ‘range’?

ADAM: That’s a great way to put it. Our creative range is as limitless as our next wacky idea. We like to think that the games we make can encompass all the various emotions that a person feels in their life. It’s about making something that connects with people, so we need laughter just as much as we need solemnity. 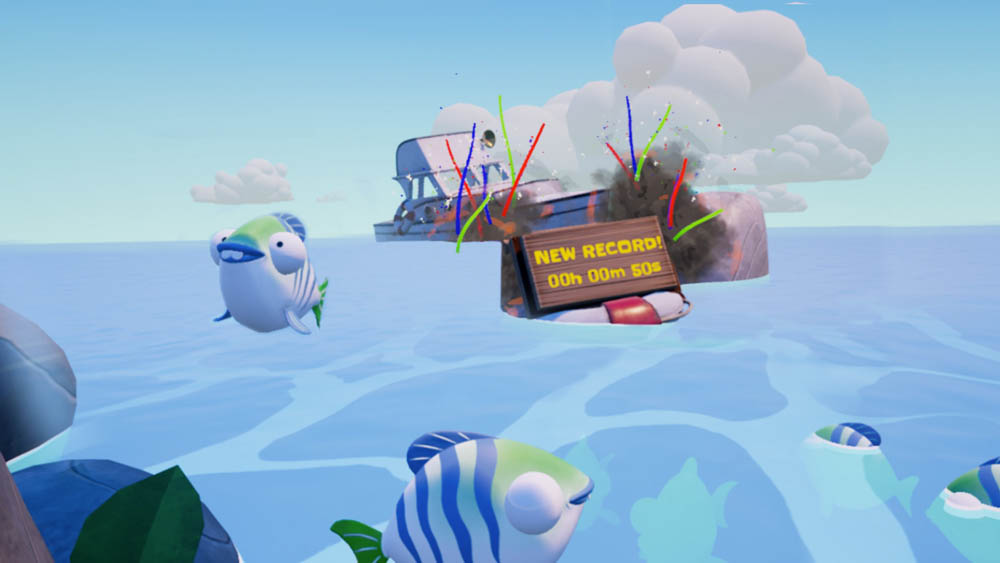 Finally, if you were on a desert island what would you make for yourself to try and survive?

RUBY: First of all, I would try to build a little house for myself. I am really afraid that the weather will be too hot or too cold. I think before I catch anything or finally make fire: I’ll be sunburnt! Setting the whole island on fire might be a good way to catch attention, but, you could lose your best friend Carl, so that might not be a good idea.

Thanks for talking with us, Adam and Ruby. Good luck getting off the island!

Island Time VR is available on Viveport and in Viveport Subscription.