In a significant step for VR esports, a new global arcade league is forming. Co-hosted by Virtual Athletics League (VAL), arcade management platform SpingboardVR and mixed reality streaming software LIV, the pilot season is getting a major boost from corporate sponsors HP, Inc and HTC esports. This effort is also a collaboration with seven prominent VR game development studios. Official competitions will take place around the world in cities with VR arcades through the rest of 2018 and beyond. 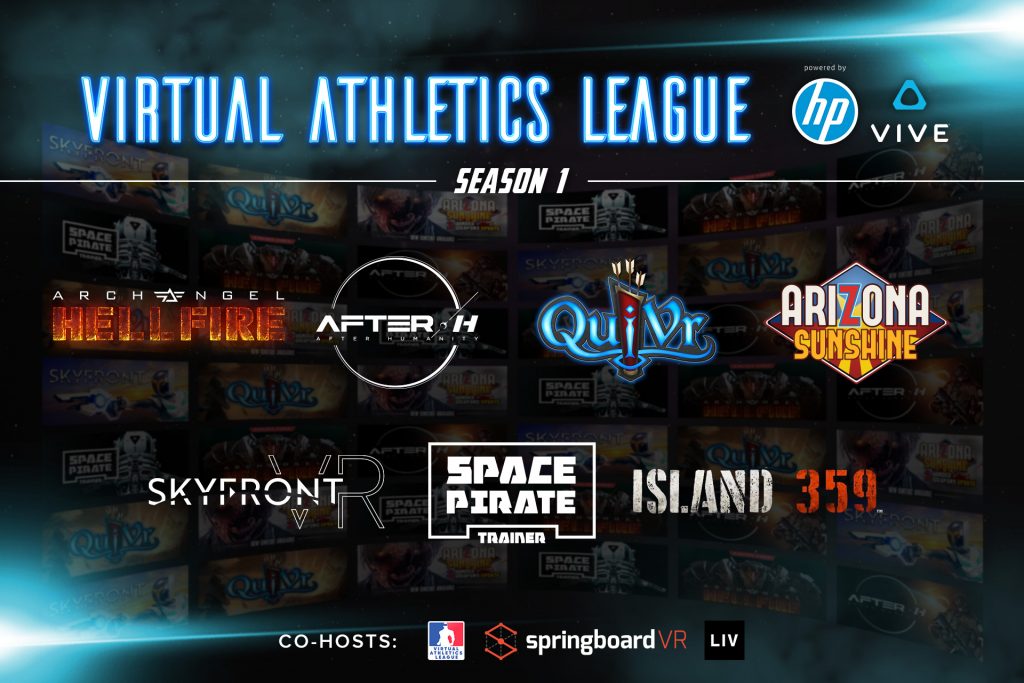 VR esports have long been the realm of science fiction, but the reality is that VR esports are happening today and gaining momentum. The introduction of the HTC Vive two years ago and sophisticated controllers represented a tectonic shift – it moved players from behind computer screens, into the center of their living rooms and VR arcades worldwide.

Ideal games for VR esports are easy to learn, but hard to master.  Any new player can walk into an arcade worldwide and within minutes shoot drones in Space Pirate Trainer. However, it takes hours and hours of practice to climb global leaderboards.  At the elite level players start to perform time bending moves, dodge lasers by sound alone, and land insane combos with dozens of drones shooting from all directions. People who a few short years ago had never heard of VR, are now competing in VR esports on a global scale.

The Virtual Athletics League started two years ago as a concept from Virtualities, a VR arcade in Salt Lake City, Utah.  From the beginning, we saw the potential for VR esports to become a new major worldwide movement. We first noticed that VR athletes were a special demographic after looking at return rates following a local VR esports tournament. Normal customer return rates hovered at around 20%. For customers who attended our VR esports tournaments, that rate skyrocketed to over 50%.

From there, we held a few regional cross arcade tournaments, then a national one for Blaster of the Universe alongside 10 arcades.  When the Beat Saber Arcade version was released, the Virtual Athletics League was selected as the official arcade tournament organizer. It was originally slated to take place at 50 locations, but for arcades, it was VR esports gold.

The competition took place at a record-breaking 168 locations globally, with several thousand players and hundreds of video-recorded high score submissions.  With Beat Saber, players really put the “Athletics” in Virtual Athletics League, with some player’s heart rates topping out at nearly 180 BPM. This physicality drives the same type of grit and competitivity that are seen in both traditional sports and esports.

Over the course of the tournament, thousands of participants dedicated hours toward achieving the global high score. Our co-host SpringboardVR reported that the number of minutes played in arcades for Beat Saber doubled that weekend over the previous weekend.  Our tournament winner took dedication to the next level. They drove many hours, slept in their car, and dominated the competition the next day, taking 1st place out of thousands of participants.

The announcement of the league represents a new chapter in international VR esports.  For the first official title of the season, a global Space Pirate Trainer tournament is slated to take place September 27th-30th.  Following that, global tournaments will be held with double horror combo Arizona Sunshine and Island 359 for Halloween, then QuiVR in November as an archery multiplayer event.  The league is also placing a high priority on arcade vs. arcade gameplay, with a core group of elite VR arcades participating in more team-based titles that are VR esports ready.  These official launch titles include the giant mech multiplayer shooter Archangel: Hellfire, a jet-propelled shooter Skyfront, and a tactical sci-fi shooter After-H. More titles will be added later.

Arcade vs. arcade gameplay is on the cutting edge of esports.  For a long time, traditional sports have benefited from fans loyalty to geography. For us in Salt Lake, we love watching the University of Utah, and their new varsity esports team. While the global arcade tournaments are open to all VR arcades, we are also building a more exclusive core league.The concept behind the core league is that eventually, city-based play will take place on the same scale as professional sports franchises around the world. Our hope is for each arcade to eventually have things like jerseys, dedicated teams, professional casters and a Twitch fanbase.  With the sponsorship from HP, inc., HTC Esports and new developer tools like LIV, competitors and spectators alike can compete and engage with esports on a whole new level.

VR esports is no longer science fiction  – it’s happening now and the team at Virtual Athletics League is thrilled to be along for the ride. Learn more about VAL and VR arcade esports: www.valvr.com