With a small team and a lot of commitment, Russia-based VR studio Gexagon VR are certainly punching above their weight with Nevrosa: Escape. On Halloween of all days, it seemed like a good time to talk to them about things that scare in VR, so we tied up (figuratively of course) a few members of the Gexagon team including Oleg Sanin and Sergey Zubarev to get them to talk.

For the uninitiated, tell us a bit about yourself and the team at Gexagon.

GexagonVR was founded in 2014 in Saint Petersburg, Russia. We wanted to show people one of the most exciting technologies we’d seen – virtual reality.

The following year we were demonstrating VR and participating in the biggest technology conferences. We saw only positive feedback from players in Russia. Thus, with the support of our promotion and partners, we were able to introduce many people to VR and get valuable feedback.

After collecting and analyzing the feedback we decided upon our first project—Ultimate Booster Experience (available on Viveport). We first released it with the available VR devkits. After the HTC Vive headset was introduced, we could break into the world market.

What inspired you to make Nevrosa: Prelude and then Nevrosa: Escape?

After our first successful game, we thought of bringing something new and unique to VR industry, to make the most of the freedom of movement that the HTC Vive headset provides.

We decided to make an escape room game. It plunges players into an unnerving atmosphere, and requires players to be both careful and quick-witted. Most of our team grew up in the 90s when horror was all the rage. Many horror writers and directors were popular then all over the world; the biggest titles were released those days.

A new media age brought us new kinds of horror—interactive video games, where the player can be a part of the terrifying events. Combining puzzles and horror, such titles as Silent Hill and Resident Evil were mind-blowing for us from the first minutes.

What would you say are the greatest influences on the story, tone, and atmosphere of the Nevrosa universe?

Sergey Zubarev, Lead Artist: The Nevrosa universe is inspired by the recognized masters of horror and mystery. One of the biggest inspirations for us was Clive Barker and his incredible Hellraiser series. The grotesque creatures of the other dimension, one that combines technologies and bioengineering while also possessing supernatural powers, formed the basis of our monsters and the mystical artifact—the Cursed Cube.

The terrifying beings created by David Cronenberg influenced the main antagonist of both games. It’s an eerie imp, who still has some human attitude and consciousness.

Another talented horror writer, Stephen King and the amazing adaptation of his story The Mist by Frank Darabont inspired us to create the Mist World.

A human left alone with a completely new world is a very curious thing. Just like the first American Frontier explorers, each generation of the Conway family is drawn into the adventures in the uncanny Mist World that hides behind the vague teleportation mirrors.

To immerse myself into the right atmosphere while working I had things like the 80s and 90s movies of Cronenberg, Carpenter and Clive Barker playing in the background.

Every object in the game is unique. It was created with special attention to the details. Every pixel of texture has its place, and even the simple objects have something new to show every time people play. 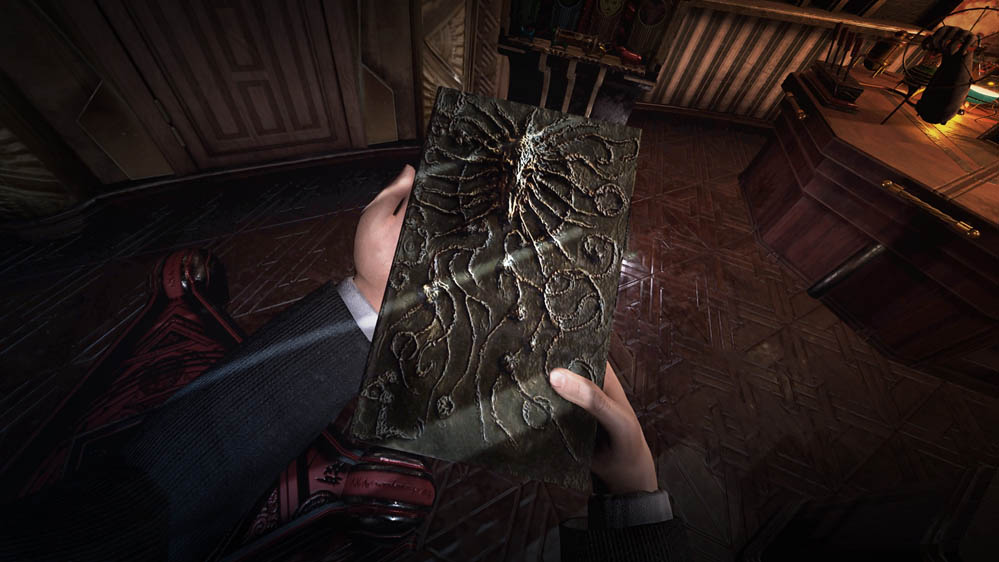 Creating a chilling, tense experience that also challenges the mind is no small order. How difficult was it to get the balance of chills and brain-teasing right?

It was important for us to show that even though there are furious battles, our story is mostly about the scientist. Many notes left by the main character’s grandfather lift the veil of the Mist World, depicting the main character as a brave and smart person with a curious mind.

Following his path, we ourselves turn from a watchmaker into an adventurer. You can most clearly see that in the Misty End, where the main character, denying the sins and fears of our world, is coming back to the Mist to face the truth.

Working on the puzzles in the grandfather’s laboratory, we were trying to make them as logical as possible, so the player in the end, after many tries could slap his or her forehead and say, “It was so simple!”

A good example is a puzzle with the mouse on the checkerboard, where players were trying to count the steps, memorize the direction – they may have already started to think we were maniacs of some kind – but the solution was at the surface.

Nevrosa differs pretty dramatically from your team’s previous work. Can you tell us a bit about how your previous development experience influenced the direction of the Nevrosa universe?

It’s hard to believe, but our team had never had game development experience before we created our company. Even such key aspects as 3D-modeling, texture making, working on Unity Engine, and story writing we were figuring out and mastering on the way.

We think that Gexagon as a company is a case where our motivation and desire to create products of high quality help to overcome our difficulties, and where warm hearts light up new talent and skills!

Or maybe, it’s just the game dev special magic, where everyone can find their place, and it’s not that difficult to start working in that sphere. 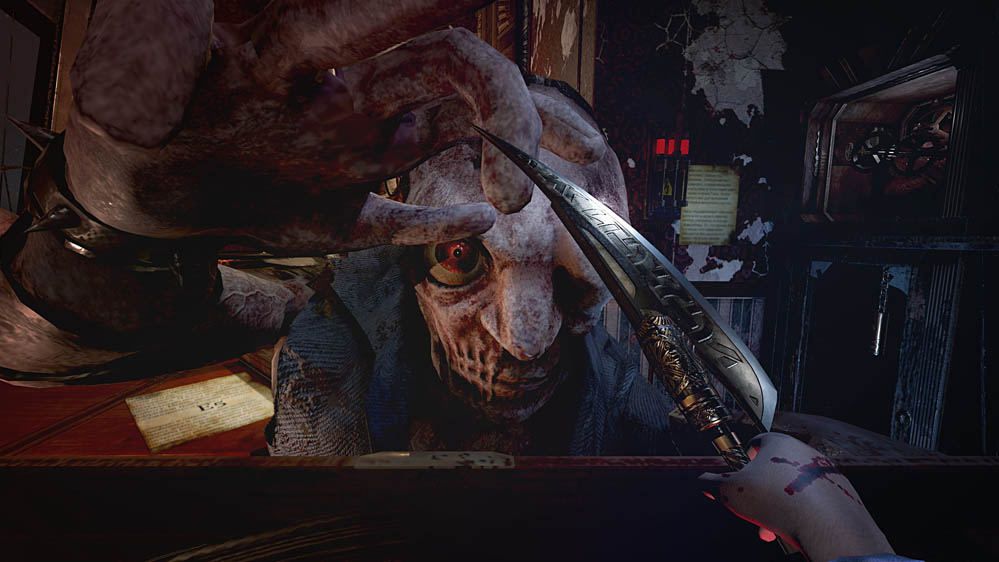 Were there any particular challenges you encountered during the development of Nevrosa: Escape?

The biggest limitation was honestly room-scale. We wanted the entire play space to fit inside the minimum room-scale size – 1.5 x 2 meters – and that required very precise location design, and as well as anticipation of player actions.

We chose the minimum size, because we wanted to involve as many VR users as possible and reach a high level of immersion. We didn’t want to draw players’ attention to tricks like teleportation or artificial locomotion, we just let them plunge into the atmosphere of Nevrosa and move freely in the location.

Such limitations let us design unique things in VR at that time. One of them is the spinning puzzle-table that is a very complex system with its own physics, but it works like a charm. Another important issue is changing the player’s height that let us see everything at the new perspectives. It is one of the things that look cool in VR, but unfortunately is rarely applied by many studios these days.

Starting from Nevrosa: Prelude we used a very complex setup of hands and object interaction when both your VR hands and the objects you pick up have their own physics. Just like in real life. We’re proud that we’re one of the few studios using such a realistic system and were not afraid of difficulties.

What inspired you to create an introductory entry into the world (Nevrosa: Prelude) you would then expand upon in Nevrosa: Escape? Do you feel that they are companion pieces that players should check out for the full experience?

The first part – Prelude – is much harsher and scarier. It is a classic horror, whereas Escape gives mostly a cinematic experience. And this is great! Having two different games taking place in the same universe brings different perspectives.

The goal of Prelude was to demonstrate the main gameplay features and to impress players with graphics and sound effects of high quality.

We think that all who enjoyed Nevrosa: Escape should really play Prelude, not only to understand the game’s world better but to see how the universe was created. 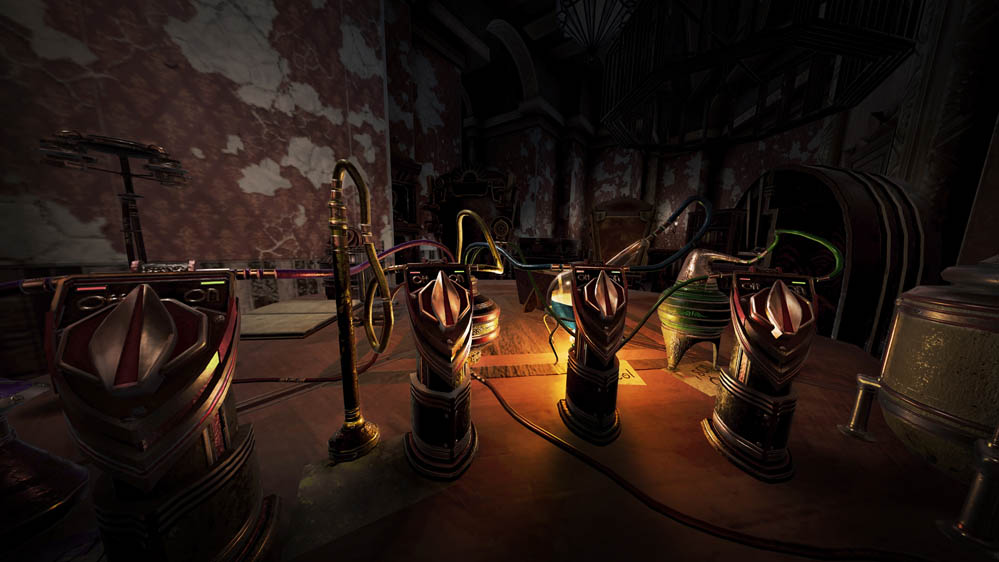 What has been the biggest surprise to you in regards to the reaction players have had to the experience? Were there any moments that really impacted people that you weren’t expecting?

Maybe it’s wrong, but were having so much fun seeing how people were trying to pull the key off the spider’s leg in Prelude! These are the moments to be remembered forever. No doubt, those who tried VR for the first time will never forget this adventure.

It’s nice that the players mentioned our attention for the details. Some players made fun of the sounds the character makes when he bumps something with his head; they were amused by the possibility that you can cut the character’s hands. The most enquiring minds started to make theories on the mental health of the character, basing on the library they found in his apartment in the first menu scene.

Were there any design ideas that you and the team wanted to incorporate in Nevrosa but had to leave on the cutting room floor for some reason?

Since the player’s body has the leading role for both the gameplay and the story, we planned to incorporate many factors that affect it. Surely, we couldn’t implement everything. We kept only the most important ones for the story, like skin cuts.

Considering tight budget and short production cycle we had to give up on such innovative ideas as dynamically moving fire, hand burns, character’s voice and reactions to the events; clothes, that getting dirty and broken, scars of spiders bites.

What could Nevrosa be with all those things? Maybe we’ll figure it out one day!

Being one of the few independent indie teams, without any external financing, we carefully choose where to move in our work. We plan to expand and deepen the Nevrosa universe. We believe that our every game will be noticeable in the genre and that more players will share our vision. So, it’s highly likely we’ll announce part II.

We want to thank HTC for supporting our small team all this time. Because of you, we could concentrate on the creative part and not bother about technical issues.

Thanks for talking to us!

Nevrosa: Escape is available on Viveport and as part of Viveport Subscription.