Closing the loop with the mind-bending experience A Fisherman’s Tale
Vive Team  •  12.14.18

In the topsy-turvy VR adventure A Fisherman’s Tale – coming to Viveport January 22nd – you’ll go on a mind-bending adventure that will challenge your perceptions on your journey to discover the truth behind the surreal M.C. Escher-like scenario you find yourself in. We sat down to speak with the development team to hear what went into this clever and challenging experience.

Innerspace VR is an independent studio based in Paris, with one foot in the US. We have been working in VR for a long time now, some in the team since even before VR’s revival! Our DNA is both narrative and artistic, however we’ve always followed closely where gaming in VR was headed. After a few narrative experiences and awards which cemented the reputation of the studio among early VR adopters, we decided to step into VR gaming – while remaining true to our DNA.

One of our mottos is that if VR cannot bring something significantly transformative to whatever it is that we are building, be it a gaming or narrative experience, then we need to rethink our approach. In the case of A Fisherman’s Tale, we believe the gameplay and the Russian dolls principle which are central to the game would simply not be as exciting outside of VR. We’re convinced that anyone who dons a headset and picks up the controllers will immediately recognize the world we are putting them in is not only unique, but particularly satisfying in VR.

The gameplay is far from being the only key ingredient in A Fisherman’s Tale. Staying true to our DNA, we decided our game would be heavily narrative focused and we’re absolutely certain it makes A Fisherman’s Tale a very unique creation both in the VR space, and even in the gaming space in general. 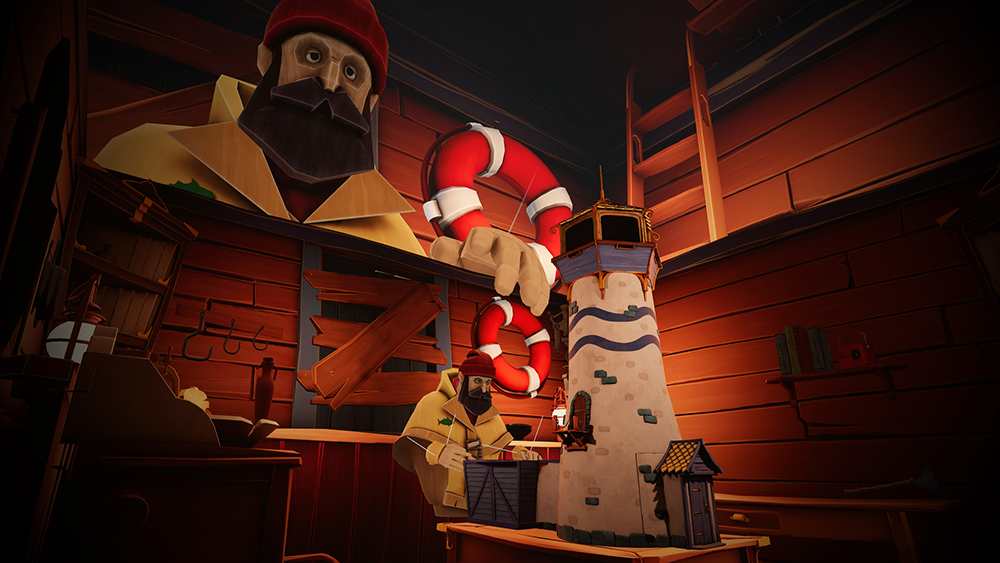 What were some of the biggest inspirations on the design of A Fisherman’s Tale?

There are so many! We should mention mind-bending puzzle games such as the great Portal and sandbox games like Owlchemy Labs’ Job Simulator. In terms of narration, “The Little Prince” and “Alice in Wonderland” were great inspirations. The visual style, purposefully a bit “cartoonish”, is quite unique in our minds, as we use it to give players the feeling of being in colorful and warm painting. In terms of music, we were lucky enough to work with the extremely talented Norman Bambi, and the quirkiness you can hear in his work is still present in the game.

Were there any concepts, sequences or ideas that you wanted to work into A Fisherman’s Tale but just couldn’t find a way to make it fit?

Absolutely! All the sidekicks probably have some very interesting stories to tell, and maybe a whole world of their own. We would have loved to explore those. Maybe someday!

What have been some of the biggest challenges in developing A Fisherman’s Tale?

In terms of gameplay, getting players to immediately grasp the gist of the recursion was a challenge. We really want people who play the game for the first time to be amazed by the sheer scale and dimensionality of the world we’re putting them into. So we put a lot of care into taking the players by the hand from the very first minutes of the game until the big reveal.

Also, since the game is so narrative-focused, while having a sort of sandbox aspect to it, we worked hard on balancing the moments when the player needs to pay attention to the storyline and the moments when they should focus on the puzzles. It’s very tricky, because everyone looks for something different in these games: some want to focus on the storyline, while others are in it for the puzzles and challenges. We do not want to force the players too much, so it’s all about nudging them into paying attention to what we think they should be paying attention to.

Lastly, the game is optimized like crazy! All these recursions and visual effects require a lot of computing power, however we wanted the game to be widely available even on modest configurations. 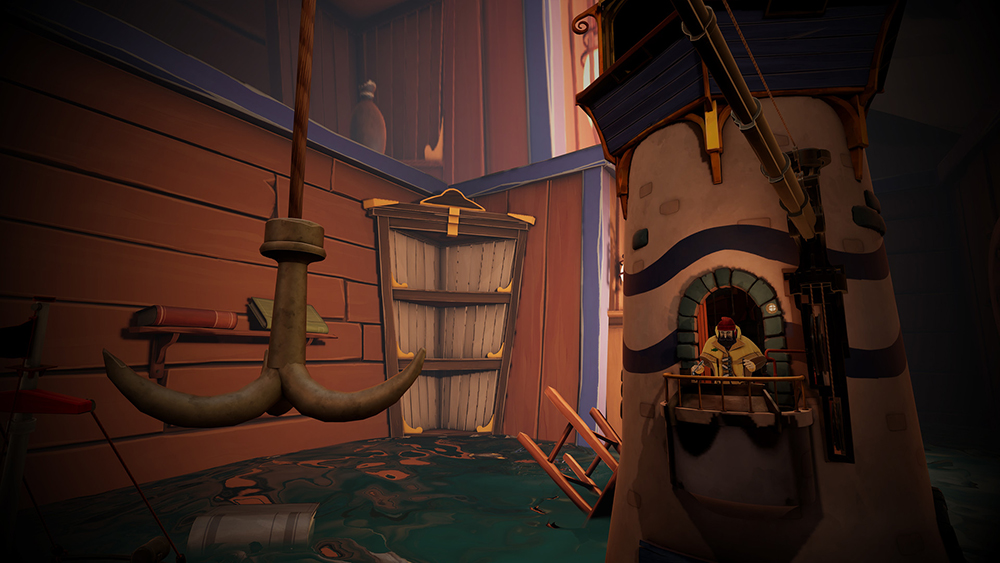 A Fisherman’s Tale has been demoed at events like Indiecade and Film Gate, having earned accolades at both. Was there any particular feedback that surprised you?

Newcomers and VR veterans alike seem to recognize how different the game is, and how “fresh” it feels in the overall VR landscape. What is very exciting to us is that people who are not necessarily big fans of VR seem to enjoy the game a lot still. As big VR believers ourselves, we hope that with A Fisherman’s Tale we’re helping make the medium become a little more mainstream — so this is the kind of feedback we’re very proud of.

The very first “recursion” prototype dates back to early 2016, so with the game launching on January 22nd, it has taken us 3 years from the first concept until the final game – but really we’re closer to 10 months of full production time. Over the whole production, about 30 people have been involved at various stages, some working on the POC, some on the last minute optimizations – all great and passionate people. 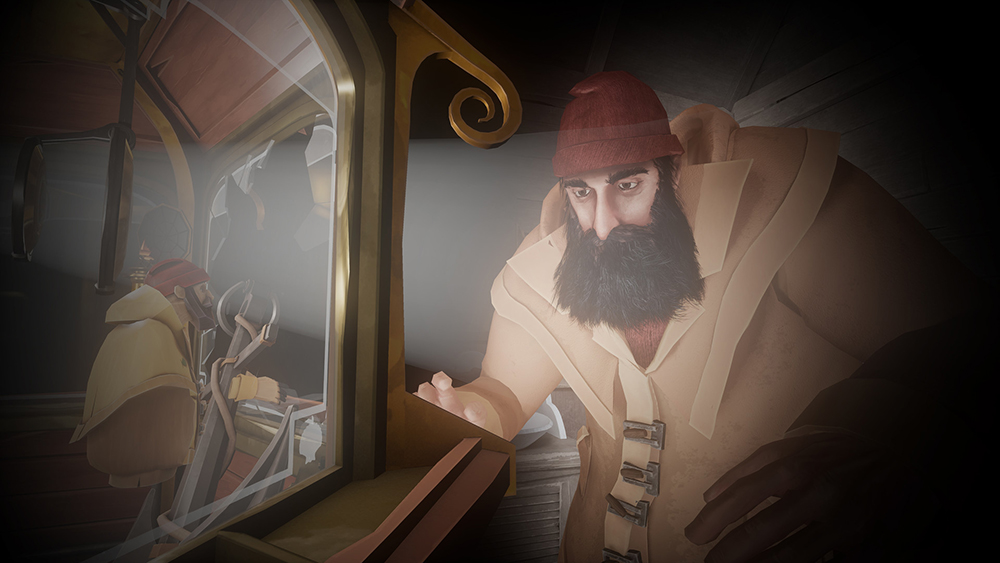 What do you ultimately want players to take away from their time with A Fisherman’s Tale?

We hope they enjoy the storyline, appreciate the universe we’ve built and the care we put into it. Besides the fun, we wanted to bring something meaningful and poetic to this experience. What does it mean to be inside a replica, in a VR illusive world? That’s why A Fisherman’s Tale is a story about breaking from illusions to find truth. But most importantly we hope players will come to recognize VR as a really powerful way to make experiences like nowhere else.

What’s next for Innerspace?

We have a few other exciting projects in development – but there isn’t much we can share about those at this point!

With A Fisherman’s Tale just now releasing, it’s totally understandable. Thanks for speaking to us, we can’t wait to see what you have coming next!