How are we only days away from June already? With summer just in sight and spring growing distant in our rearview windows, it’s that time again to take a look at what is coming next.

This month, you can beat the heat and play inside with eight new additions to your Viveport Infinity library. From fantastical puzzles to must-play PVP shooters and even bartending simulators, your backlog of games is bound to grow in June as the quality hits keep on releasing. 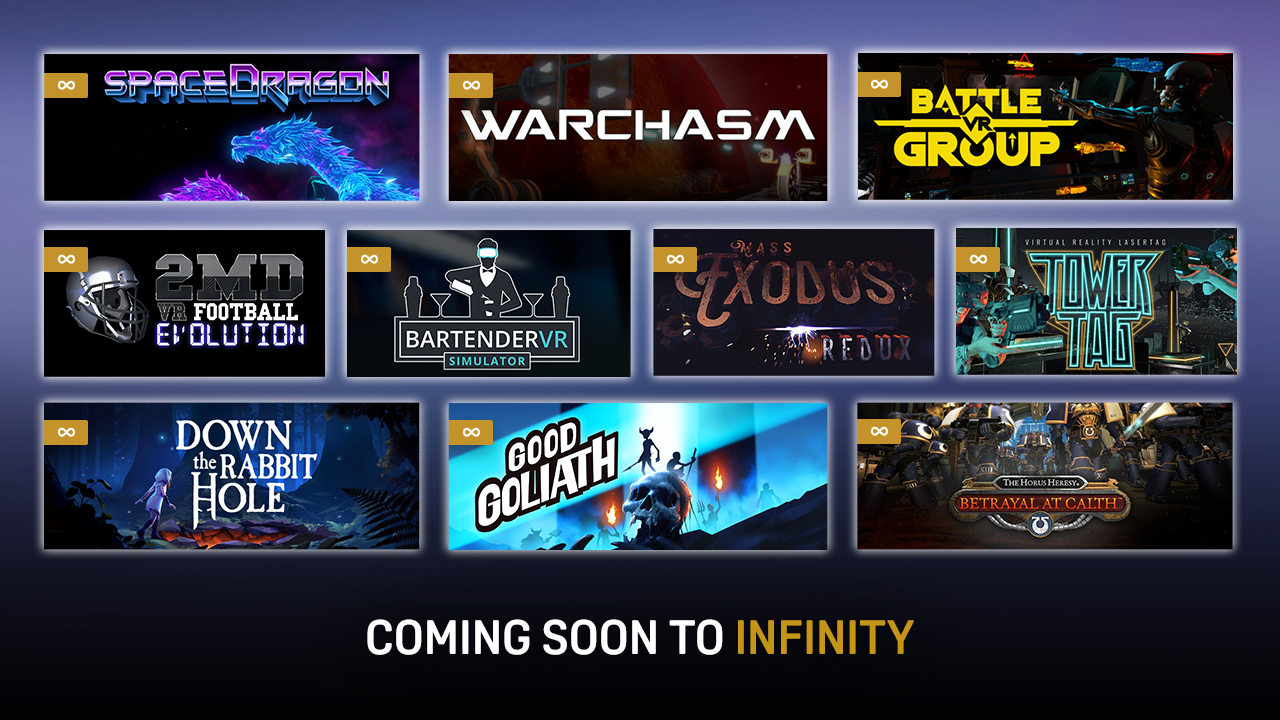 Tower Tag is a hyper-dynamic cyberpunk PVP shooter with a grappling hook locomotion method that becomes second nature instantly. Conquer as many tower platforms with your team as possible to be able to move quickly across the field and beat your opponents with tactics and surprise.

Whether you’re playing the seeker (VR) or rogue android (PC), Mass Exodus is a tense and absorbing local multiplayer game. With 4 extensive maps each with unique kill methods and some creative power-ups, you need to try to outsmart your friends any way you can.

Good Goliath is an arcade-action game where the player is a giant battling hordes of little foes. With wave-based tower defense gameplay where players are the tower, catch, dodge and throw pitchforks, barrels, and even tiny enemies! Battle armies, mini-bosses, and monsters in storybook worlds.

Battle hordes of murderous mechs as you hurtle through the canyons, chasms and caves of an alien world in a desperate bid for survival.

Have you ever wanted to destroy a world? How about ten? Twenty? Take control of a pair of hatchling space dragons and blast your way through the cosmos with our innovative move-and-warp system. Fight the robotic armadas that have enslaved the massive beasts of the galaxy!

The Horus Heresy: Betrayal at Calth by Steel Wool Studios

The Horus Heresy: Betrayal at Calth is a turn-based combat epic set during the origin era of Warhammer 40k. Play on either PC or VR, as the game will detect your platform choice. Take command of Ultramarines as they battle against their traitorous brethren, the Word Bearers.

Working in four unique and professionally equipped virtual bars, you will experience the thrill of the art of bartending under the watchful eye of Tomasz Małek, a six-time Bartending World Champion. Begin your journey in a music club and learn how to make four basic drinks. Prove yourself and win the opportunity to train and work in the next location. Master more and more demanding drinks as you progress to new, unique bars.

BattleGroupVR is a designed for VR, first-person real-time space strategy where you lead a fleet of powerful warships into battle from the bridge of your own flagship. Assemble your fleet, upgrade your load-outs, train your captains, engage the enemy and secure the sector. Try not to go down with the ship.

2MD: VR Football Evolution is a room-scale two-minute drill VR arcade experience where players take on the role of soulless automaton tasked with capturing victory in the final minutes of a game. Draw the plays, call the shots, and throw the ball to take down opponents before the clock runs out. Or Else.

Down the Rabbit Hole by Cortopia Studios

Down the Rabbit Hole is a VR adventure set in Wonderland prior to Alice’s arrival. You will guide a girl who is looking for her lost pet by solving puzzles, uncovering secrets and making choices about the story along the way.

Arizona Sunshine – Don’t miss the chance to play one of the most popular titles in VR before it leaves Viveport Infinity!