The Ellen Fund Presents: Gorillas in VR is a beautifully ambient experience with spatial audio allowing people to spend a few intimate moments with wild critically-endangered mountain gorillas in the volcanic jungles of northern Rwanda.

Produced by award-winning immersive studio Habitat XR, the experience was a collaboration between famed talk show host and comedienne, Ellen DeGeneres’ Ellen Fund, the Dian Fossey Gorilla Fund and the Rwandan Development Board.

We chatted with Habitat XR Founder & CEO, Ulrico Grech-Cumbo, to learn more about why this experience was created:

HOW DID A SOUTH AFRICAN XR STUDIO LAND UP WORKING WITH A HOLLYWOOD CELEBRITY’S CONSERVATION NON-PROFIT?

I’d spent about a year trying to convince the Dian Fossey Gorilla Fund to bring us in to produce a premium 360 film about their amazing work with mountain gorillas. Many will know Dian Fossey’s work through the famous film, Gorillas in the Mist. Largely due to their efforts, the population of gorillas in the Virunga region generally is healthier than for many decades. But the budget was hard to find.

One day, just as I started thinking about giving up on the idea, I got a call from Tara, the President of Dian Fossey Gorilla Fund: “Our partners at the Ellen Fund are putting together a fundraiser in Los Angeles and they want a VR experience for it. We’re recommending you guys!” The Rwandan Development Board came on as a crucial partner, granting us extended access to the park and gorillas, and the rest is history! 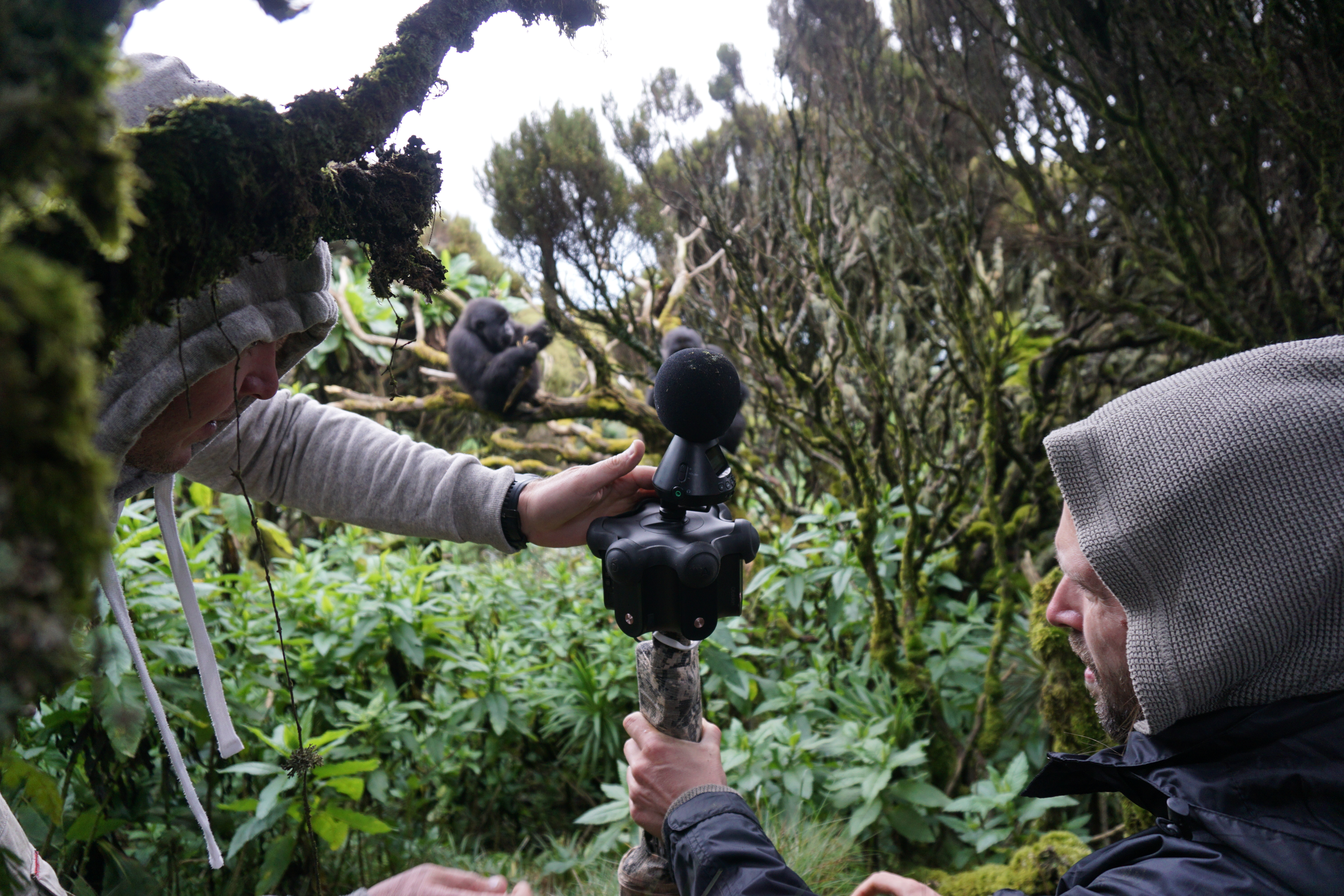 Kind of indescribable, really. We got to spend time with gorillas that only researchers ever get to see. The way it worked was, we followed trackers who got a few hours head start on us to try to locate a group, known as “the Pablo group”. We rendezvous with them, but before we get within visibility of the gorillas, the guides proceed to teach us how to speak gorilla – seriously! We are taught how to create low guttural rumbling noises to indicate that we come in peace. We “ask permission” to approach the group by making the noises and are told to wait for a response from the gorillas – which, astonishingly, we appear to receive!

We move in slowly through the thick vegetation, and as I look up, there is a blackback (juvenile) calmly looking right at me. Making eye contact with a gorilla is like hearing a lion roar for the first time – something primal rushes through your whole body and this crazy connection is fostered. Having never seen gorillas in person before, it was easy to mistake them as animatronic puppets. They seem too otherworldly to be real somehow; yet, at the same time, so eerily familiar to us. 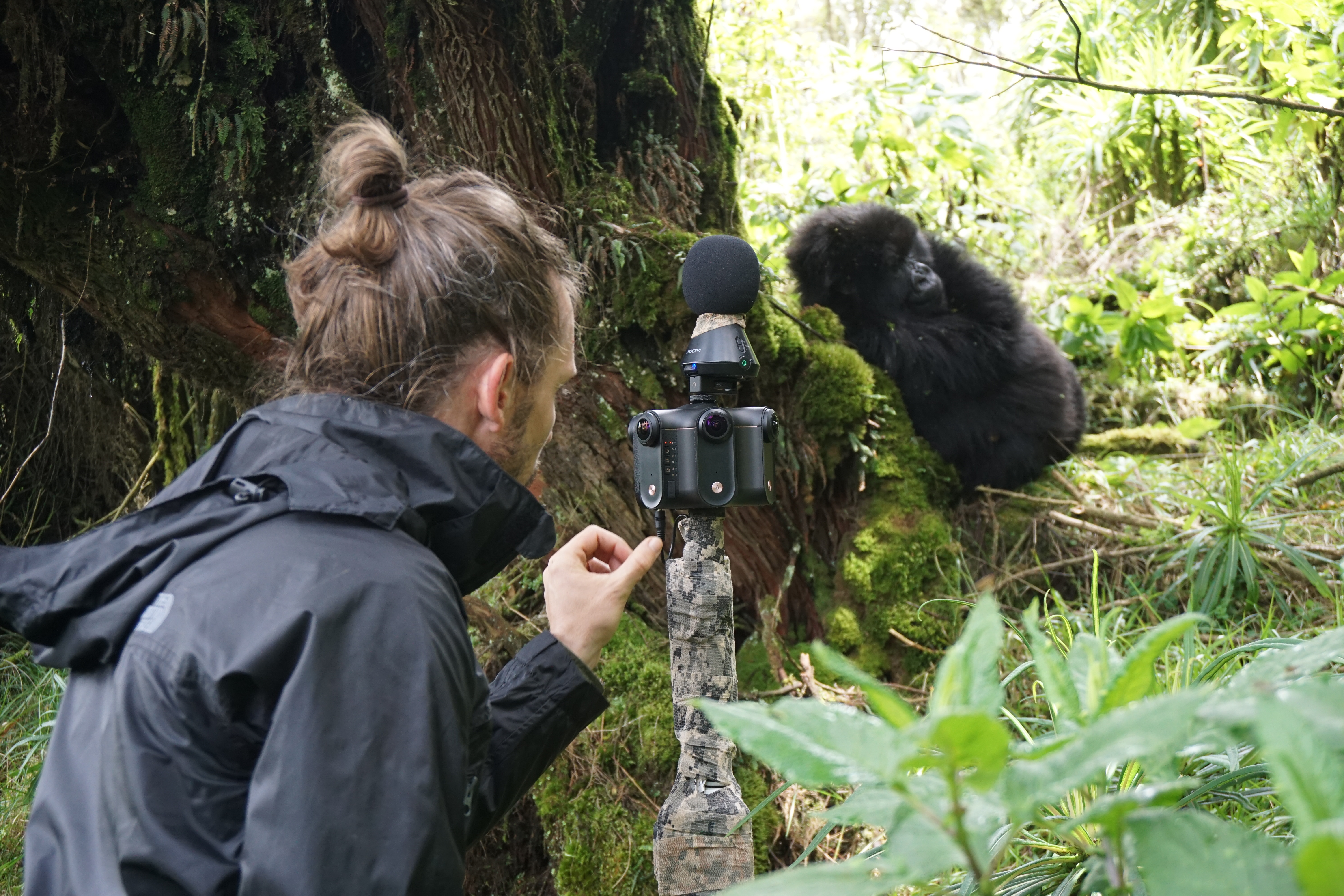 HOW DID THEY REACT TO YOUR CAMERAS?

We have filmed a LOT of wildlife in 360, and have learned there are usually two types of animals: those that avoid our rig as if it were an alien; and those that are callous and knock the cameras down or even steal it (as lions have often done!). We weren’t sure what we’d get with gorillas. But we learned that they sit somewhere in between these two stereotypes; they are very curious about the camera but incredibly gentle for such powerful animals. They would saunter up to the cameras, pretend to not be interested. Then give in to their curiosity and inspect them, touching softly and smelling their fingers. 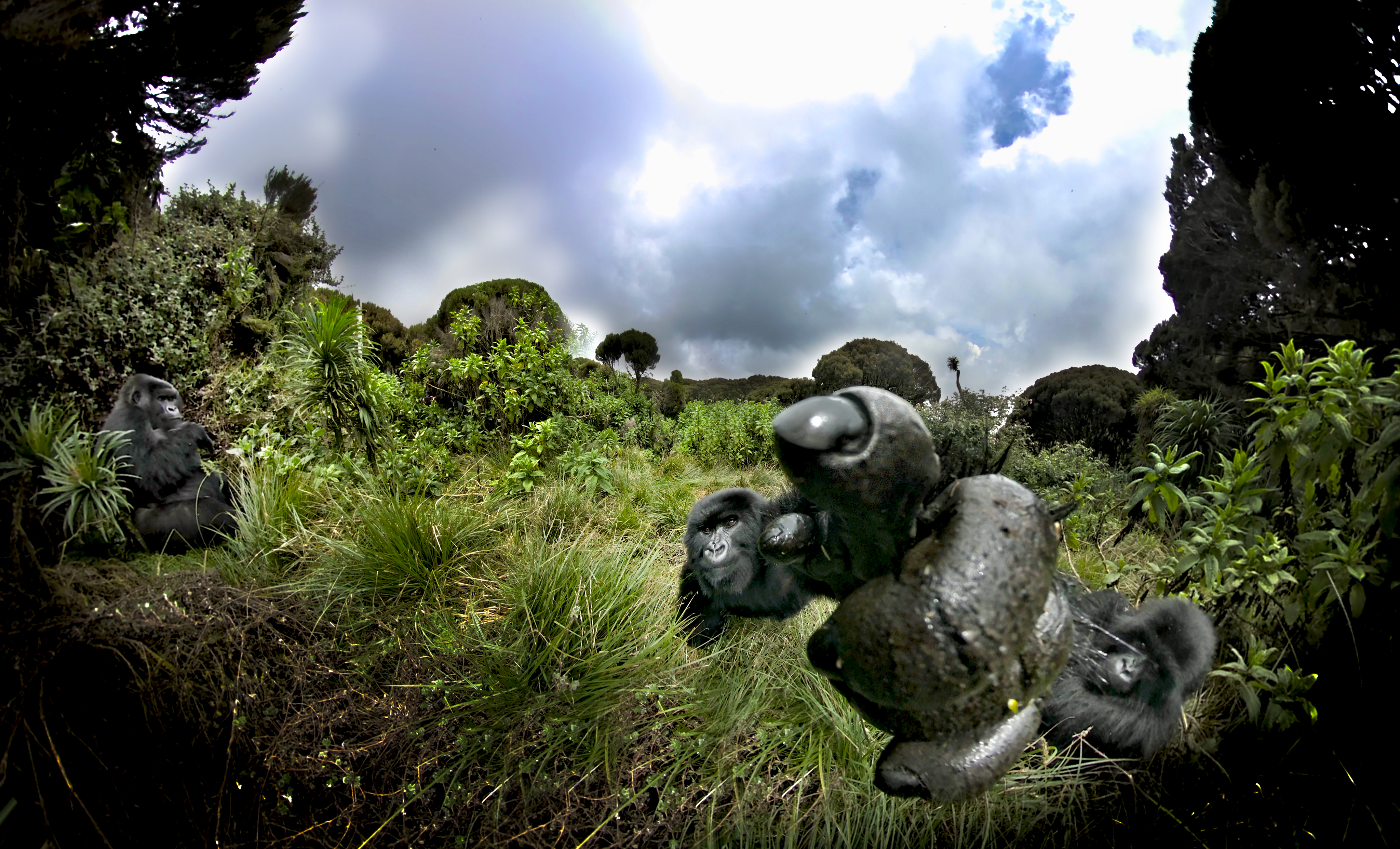 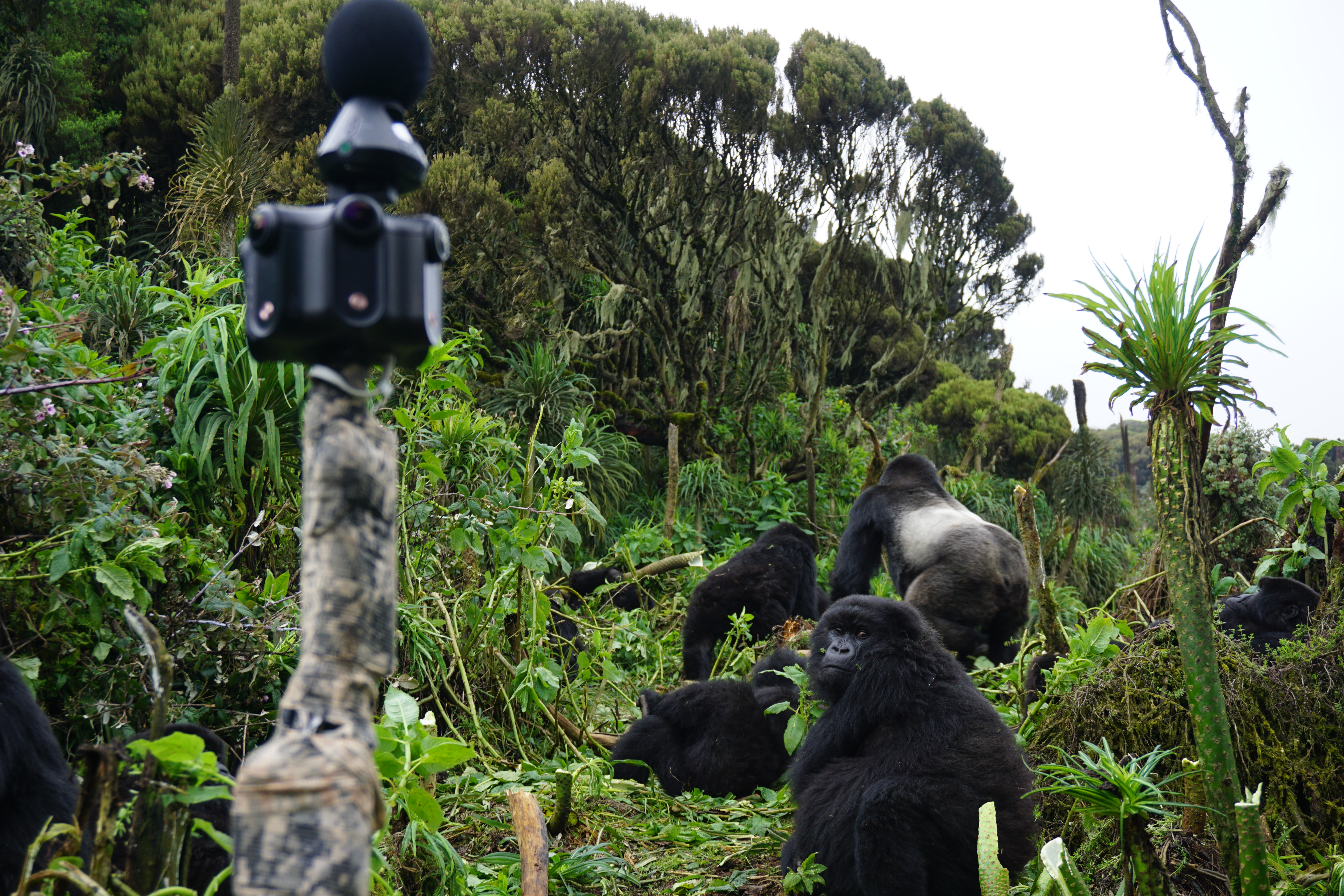 WHAT WAS THE ENVIRONMENT LIKE? ANY CRAZY SHOOT STORIES?

It was nothing short of hostile. Firstly, most of the near-impenetrable vegetation is peppered with stinging nettle. Jumanji edition stinging nettle. The stuff pierces through leather and canvas. And there are no nice tourist paths – you have to hack your way through with pangas. The hills of the volcanoes are crazy steep, and the ground was pure mud making progress exceptionally slow and embarrassing. You’re hiking at 12,000 or 13,000 ft up so you feel extra unfit just hiking, and we’re trying to haul gear up (thank goodness for help from porters!). And on top of it all, the weather was typical for a rainforest: one minute it’s searing hot and we’re shedding all but the most essential clothing, the next, we’re being pelted by marble-sized hail, followed by torrential rain so cold that even under 3 layers of clothing and raincoats we couldn’t help shivering and lost all feeling of toes. That was day 1, and we had 2 more days of this to go. 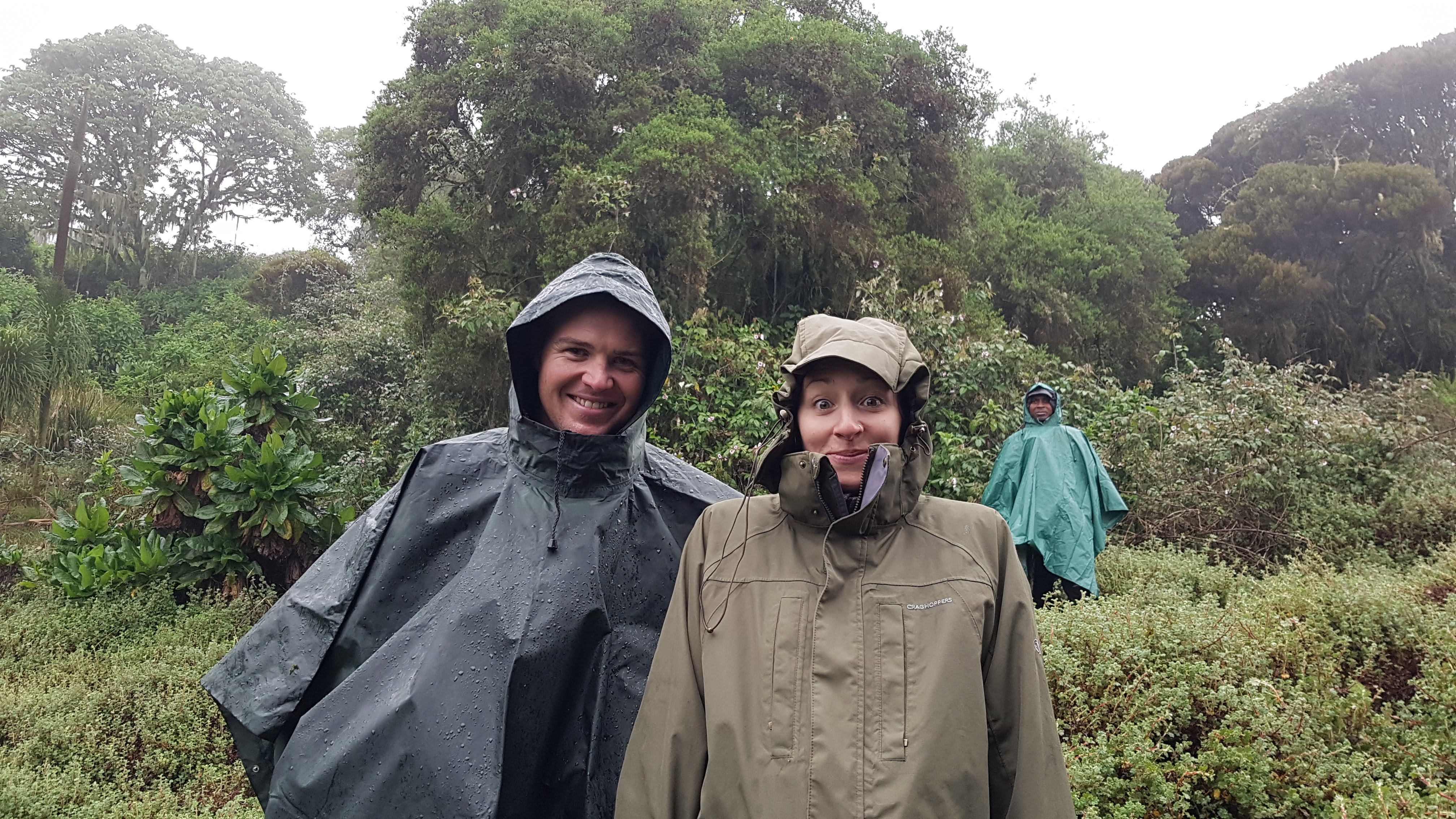 FAST FORWARD TO THE EDIT – HOW DID IT COME TOGETHER?

We didn’t have much time before the fundraiser so we went straight into post-production. Fortunately, there was no script or narration required so we could spend our time trying to get complex 3D stitching done, as well as spatial audio.

DID YOU GET TO GO TO THE FUNDRAISER WITH THE PIECE?

Initially, the plan was that we’d just film & produce the experience; a team with VR headsets in Los Angeles was going to handle the screening there. I casually threw in the fact that we had 50 headsets we’d be willing to donate if they covered our travel costs to Los Angeles. About 5 days before the event, I got a call from Casey, the head of the Ellen Fund, taking us up on the offer – such an awesome moment.

ANY CELEBRITIES WATCH THE EXPERIENCE?

LET’S TALK IMPACT THOUGH. WHAT HAS THE EXPERIENCE BEEN ABLE TO ACHIEVE? 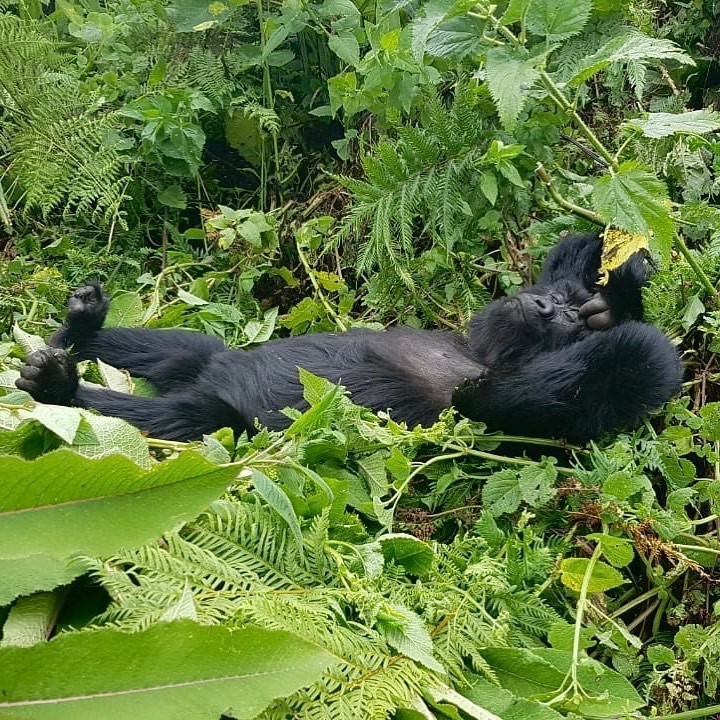 Excellent question, impact is why we do what we do. For one, that night, the Ellen Fund raised over $5 million for gorilla conservation. While the VR experience alone wasn’t the only reason, one of the wealthy donors came up to me at the end of the night and said “I strongly believe that figure had a lot to do with the VR experience, so I wanted to tell you that”. We know from previous fundraising work with the likes of Conservation International and WWF that context builds empathy; feeling like you’d spent 5 minutes alone with gorillas in the wild helped each one of those people truly understand what it is that Ellen is fighting so hard to protect.

A few months later, Covid19 hit and we decided with The Ellen Fund & Dian Fossey Gorilla Fund that we’d release the experience to the public across all major VR platforms. In the first 5 days after launching it, the same number of people had experienced being in the company of Rwandan mountain gorillas as would have taken 234 days in real life based on ecological tourist limitations in the park. And it’s likely that these few thousand people may never even get to see the real thing given that permits cost $1,500 per person. We believe it helps take all those people a big step forward in appreciating nature and its reliance on us as a species to help other species thrive.

You can watch the experience yourself on Viveport Video today.