Immersion in your VR experience is the difference between wearing oversized goggles in your living room and being transported to another world through the power of your headset.  You want to allow yourself to be emotionally invested in your virtual environment, but your equipment or surroundings could determine

We want to help educate the world about what VR has to offer, and we know the internet loves tier lists!  So, we created the comprehensive tier list of VR Headsets for immersion in 2021! 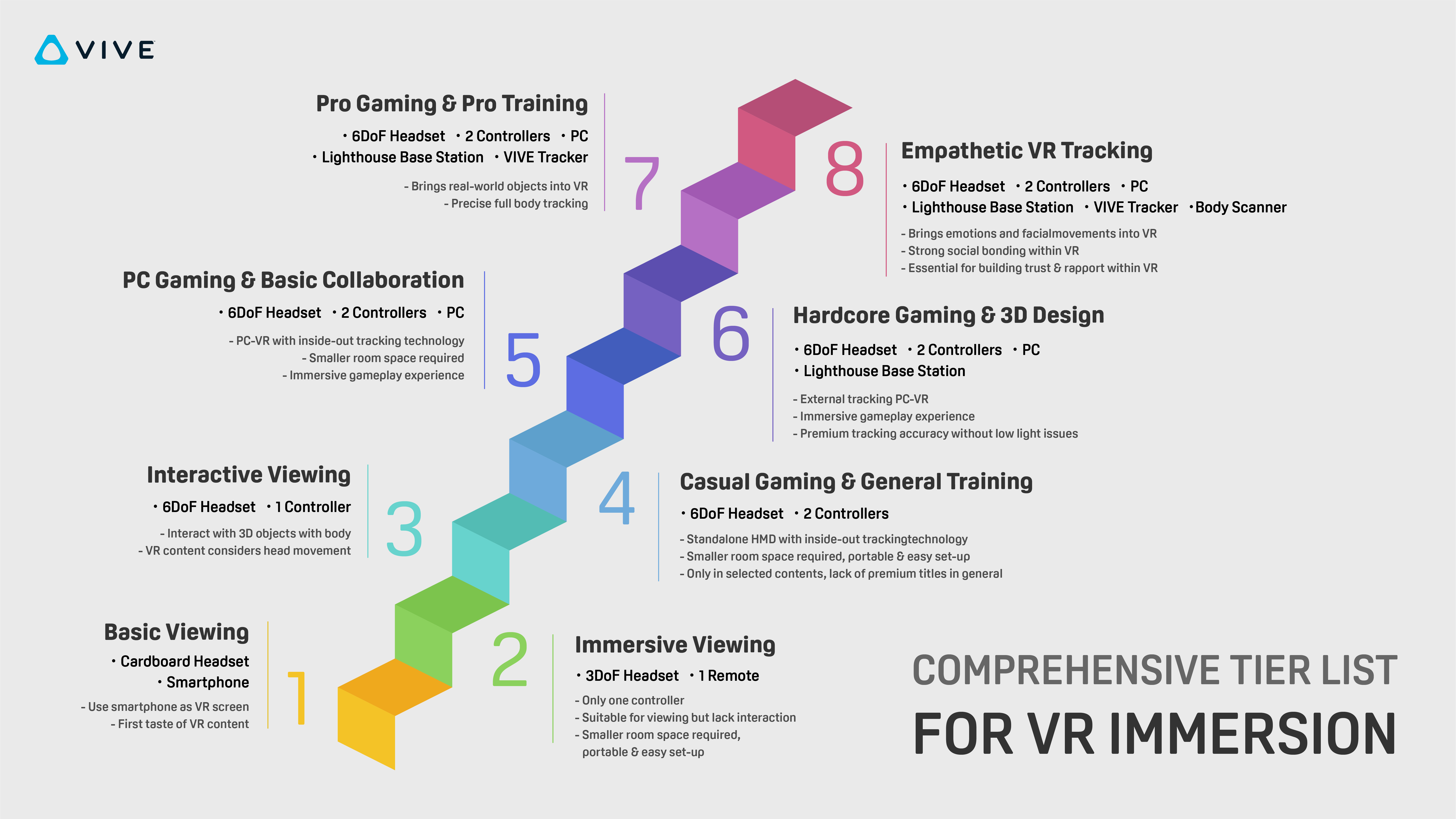 Let’s walk through these tiers:

As the tier title dictates, this is your most basic version of VR.  Where it lacks in immersive properties, it makes up for in sheer convenience.  However, this is not meant to be your primary VR experience, but it is meant to educate you on what VR is capable of at its most basic form.

This transcends beyond just the simple cardboard system; this involves a headset and a remote to simply interact with the material available.  While it still is missing certain features, it is an optimal choice for those who want a comfortable viewing experience with a low friction set-up.

This tier allows for further tracking of your head’s movements, and the remote has evolved into a controller.  The added degrees of freedom and the use of a controller allows for the opportunity to interact with 3D objects.  Compared to tier 2, this set of equipment creates the opportunity for your movement to be even better captured while still remaining very easy to set up or teardown.

This is where many VR community members now find themselves in now.  This is a standalone VR headset with two controllers.  Your body and head are now tracked through the headsets, and you have two controllers to interact with the virtual world.  The content is limited to what is available on the system itself, but it remains easy to hop in and out of VR. 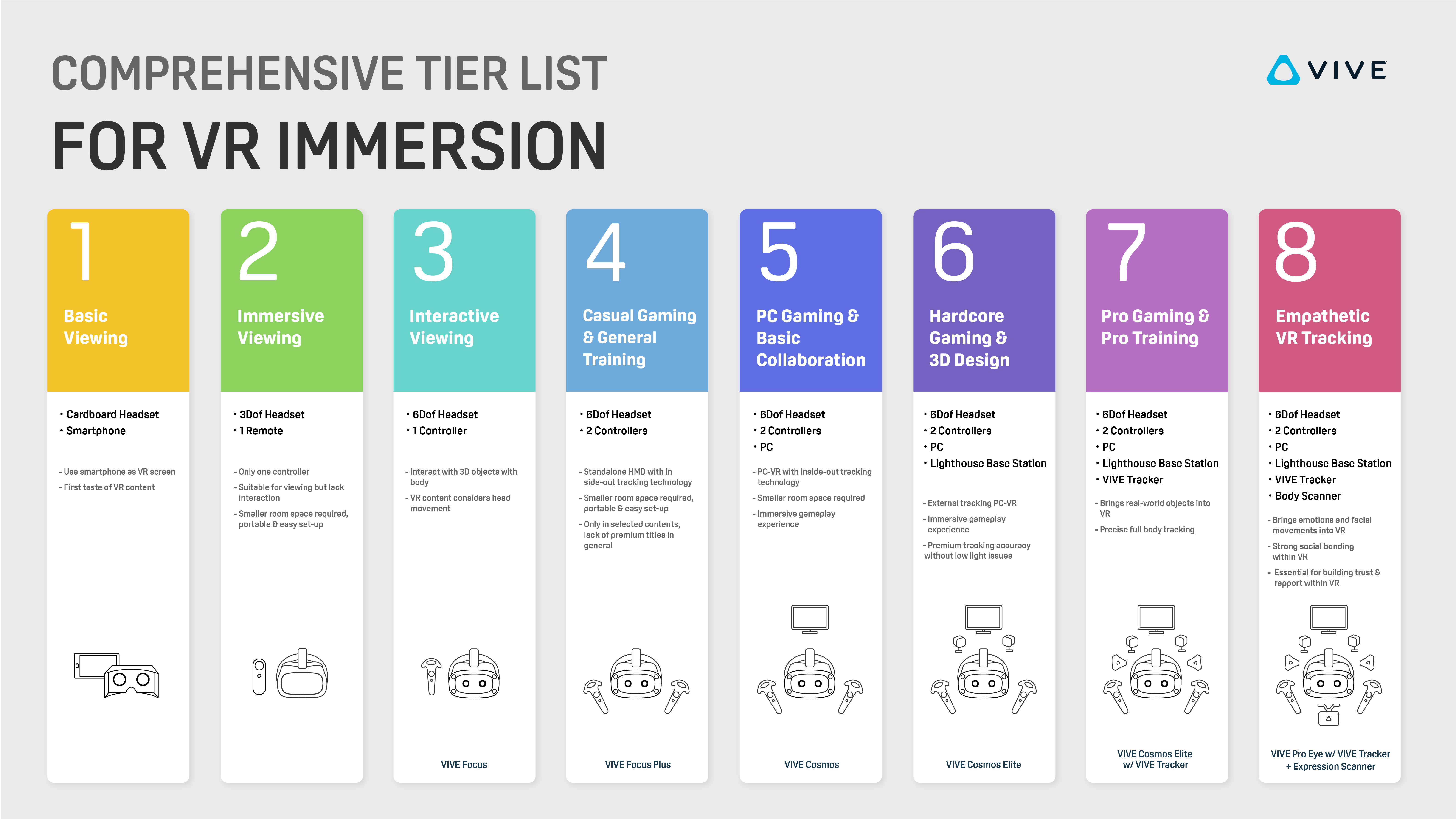 With a PC now working in tandem with your VR headset, a whole host of content is now at your disposal.  Not only do you have all the necessary functions for VR, but a wider range of content available now opens new opportunities to interact with the Virtual world.

Now, with VR Base Stations and a PC working with your headset, external tracking and more immersive VR takes place.  Premium tracking can take place without experiencing lowlight issues.

Base stations and trackers now fully capture your extremities in order for your movement to be best translated into VR.  By placing VR Trackers beyond just your body parts, you can bring real objects into VR as intractable pieces of your environment.

If the goal of VR is immersion then this is the final level of VR. Eyes, mouth, and body are now all fully trackable by VIVE hardware.This bolsters your sense of empathetic communication by amplifying facial expressions and emotions. As the future of work and collaboration further incorporates virtual reality, having the ability to be truly expressive will be invaluable.

VIVE hardware allows users to build rapport and earn trust in ways that would be impossible without natural empathetic communication. With VR Facial Trackers as well as VR Eye Tracking, we have brought the warmth of a smile into VR spaces.

By doing this we transform not only the way that we socialize virtually, but also how we conduct counseling & therapy sessions from afar. With VIVE hardware, you’re supported on a technical level and an emotional level.

The VR space is constantly growing, and we are always excited to see where the VR community innovates and pushes the boundaries of what we know as VR.