The Vive Tracker simplifies development of virtual reality experiences and allows people to track everything from ceiling fans and kittens, to feet and mobile phones.

We want to make it even easier to get started working with your Tracker project, so today we’re launching new developer experiences for you to download and tinker with.

We hope they’ll inspire you to use Trackers in new ways, or at least, help you get your project out the door faster. Follow the links for more information on each project and links to the project files.

Mobile Room-Scale by Master of Shapes

When we first unveiled the Tracker at CES, one of the most popular demos was Master of Shapes’ “Cover Me!!” game that merged mobile and Vive. Using Vive and Vive Trackers, for the first time, a mobile phone had a view into the VR world with room-scale tracking.  According to Master of Shapes:

“Cover Me!!” is a cross-platform multi-player experience where a person plays in VR alongside his friends who use their cellphone or tablet to blast away waves of enemies. I know what you’re thinking… “typical wave-based shooter yada yada” BUT by using Vive Trackers and attaching them to your cell phone or tablet you have full room-scale tracking ability just like the Vive system.

Using Unreal, the Master of Shape’s Team has posted an in-depth tutorial on how to get started with your Mobile room-scale project.

Virtual Graffiti by Master of Shapes:

The Vive Tracker enables integration of physical switches into the virtual world as well. In this tutorial, Master of Shapes will walk you through building your own 3D-printed spray can and integrating the Vive Tracker for your virtual tagging needs.

After working on the first-person-shooter-oriented Mobile Room-Scale, we wanted to show off the more creative side of Vive Tracker. For this, we developed a 3D-printed spray paint can that uses the GPIO pins on the VIVE Tracker to send commands to a demo game we’ve created in UE4. In this tutorial, we will teach you how we did it. We’ll give you the print files needed, walk you through assembling the physical model once it has finished printing, and show you how to connect the incoming signals from the VIVE Tracker Spray Can into the demo game in UE4.

Location-based VR entertainment is a burgeoning industry and Vive Tracker will also power VR experiences that are designed uniquely for an event or location. Naturally, we turned to the team over at Two Bit Circus to show us what the Tracker can do in a location-based experience (for example, the micro-amusement park they are building to take advantage of VR).

When HTC gave us the chance to be among the first to experiment with their new tracker, the application was obvious: Piñata Party!  We attached one Tracker to a Piñata and another one to a foam baseball bat.  Just add bailing wire, string, and some birthday-party engineering, and we were ready to play.

Piñata Party is a physics-based VR game where players must smash the crap out of a real piñata and vacuum up its sweet, sweet candy before time runs out. Players can pick their favorite melee weapon (baseball bat, club, or frozen fish) and use it to attack the piñata.

Mixed reality (MR) video is the closest approximation to showing what it’s like to be in VR. For VR creators or streamers, MR is the best way to market and showcase VR outside of the headset. To make it even easier to use the Vive Tracker to serve as a motion-tracked camera, we’ve released a tool that will allow the Tracker to be recognized for recording. 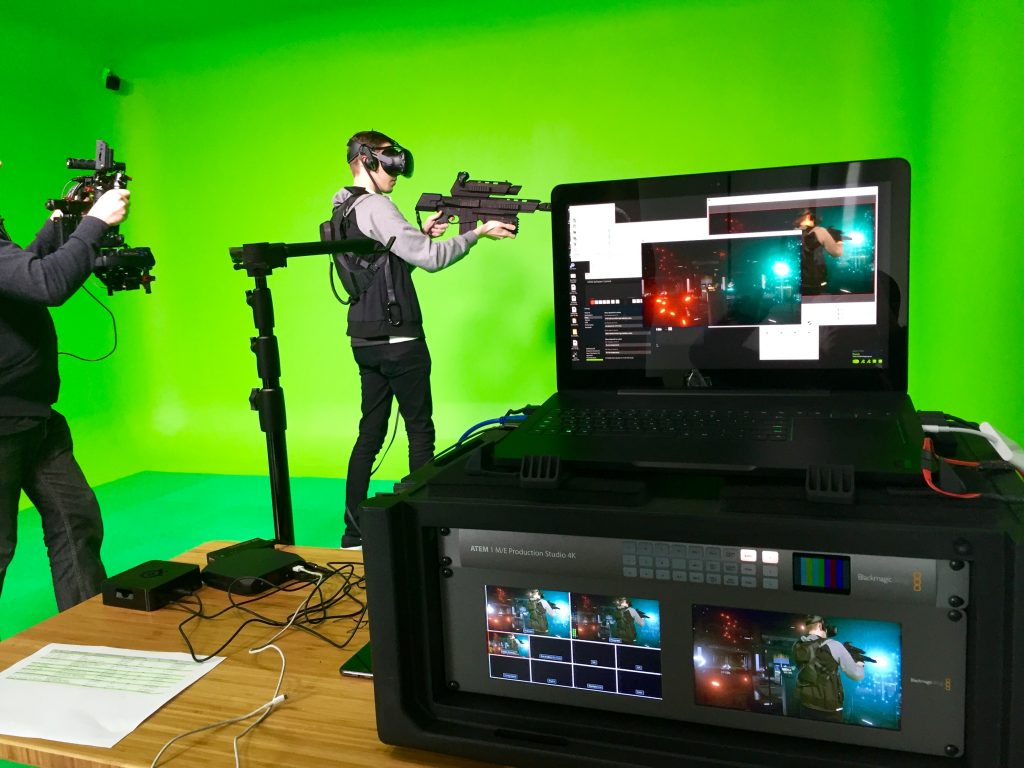