Hello there! Please introduce yourself for our audience, who are hungry for brains.

I am TJ Munusamy, and I’m COO at PlaySide Studios in Melbourne, Australia. We developed Zombie Riot.

So these zombies who seem to be involved in a civil disturbance. Tell us more – why should people try it?

Clearly, your zombies aren’t ‘realistic’, which is often the trend these days. Why make that decision?

Stylized visuals was what we were after right from the inception of a zombie shooter title which later evolved to be Zombie Riot. We didn’t want to go too realistic with the visuals nor dumb it down too much. Zombie Riot caters to a broader audience due to its art style and is much more inviting than many other zombie shooters you see around. 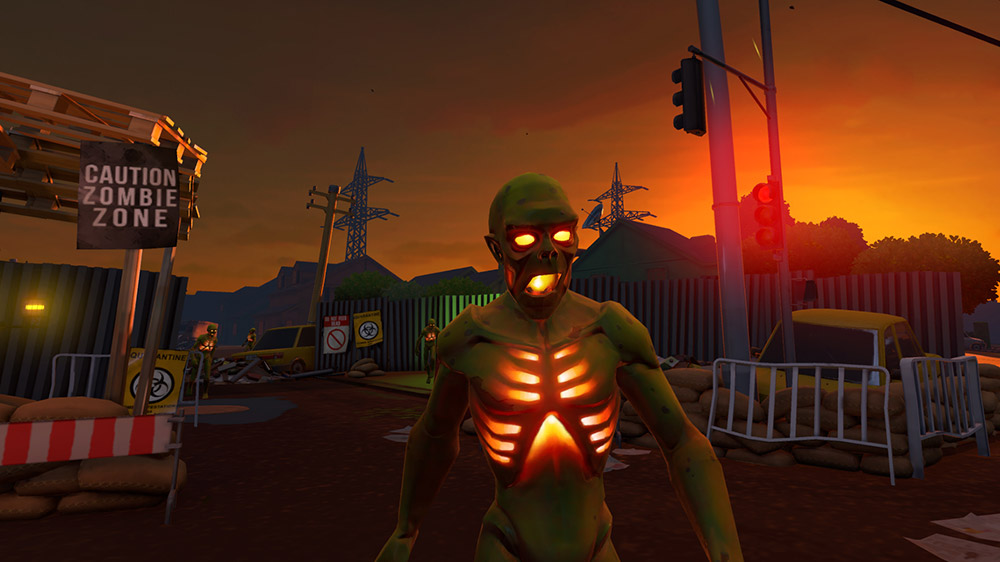 Tell us about the weapons players can wield, and how they’re different from the norm.

Leveraging the Vive controllers, players will have a very natural experience when shooting in Zombie Riot. Their’s a variety of weapons to choose from in the game from dual wielding pistols, to sniper rifles and pump action shotguns. What makes Zombie Riot different is that objects in the environment can be used as weapons too. If you find yourself in a kitchen, open one of the drawers and pick up a knife. Defend off a zombie hoard with a pistol in one hand and for any overly aggressive zombies that get up close and personal, use a knife in the other hand to slash them away with melee combat!

What makes Zombie Riot different from other wave shooters?

Zombie Riot is a wave based shooter that’s fun and captivating to play through. The environments you’re immersed in have a very unique look and there’s a variety of game modes to play through. There’s a full story driven component to the game with narrative, and also an endless mode too!

After Zombie Riot, what’s next for the studio?

PlaySide VR is always looking at new game ideas and have found some very intuitive and differentiating ways to play in VR. We’ve got a few things in the works now that are very exciting! Stay tuned across our social channels (Twitter, Instagram) for all the latest news on what’s next from PlaySide VR.