Sci-fi action series DreamWorks’ Voltron: Legendary Defender is set to continue for many seasons to come, so it’s a great time to expand their universe with a VR experience. We spoke to Lead Designer Dan Kingdom about DreamWorks Voltron VR Chronicles.

Hello there! Please introduce yourself to our audience of Voltron and VR fans.

Hi there, my name is Dan Kingdom and I was the Lead Designer on DreamWorks Voltron VR Chronicles.
I was responsible for overseeing all of the design aspects for the experience, from gameplay and puzzle design, to controls and presentation of the story in VR.

In addition, I was also the creative designer, which gave me the great honor of working with the DreamWorks’ Voltron: Legendary Defender creative and production team. In this role, I was responsible for creating the story and writing the script for DreamWorks Voltron VR Chronicles.

For anyone who might be new to Voltron, what’s the show about?

The critically acclaimed Netflix original series DreamWorks’ Voltron: Legendary Defender reimagines one of the most popular fan-favorite shows of all time in a comedic action-packed show from executive producer Joaquim Dos Santos (The Legend of Korra, Avatar: The Last Airbender) and co-executive producer Lauren Montgomery (The Legend of Korra). Five unsuspecting teenagers, transported from Earth into the middle of a sprawling intergalactic war, become pilots for five robotic lions in the battle to protect the universe from evil. Only through the true power of teamwork can they unite to form the mighty warrior known as Voltron.

In a nutshell, what sort of things can a Voltron fan expect to see/do in DreamWorks Voltron VR Chronicles?

DreamWorks Voltron VR Chronicles was designed from the very beginning to be a cinematic experience, allowing you to feel as if you are standing inside an actual episode of the show, right alongside your favorite characters.

This VR episode also features a collection of interactive moments, such as piloting the Blue Lion as you navigate asteroid fields and alien planet surfaces, solving devious puzzles, and performing physical actions.

If you’re a Voltron fan and have always dreamt of living out your fantasies from inside the show, DreamWorks Voltron VR Chronicles is our best effort to help you realize that dream! 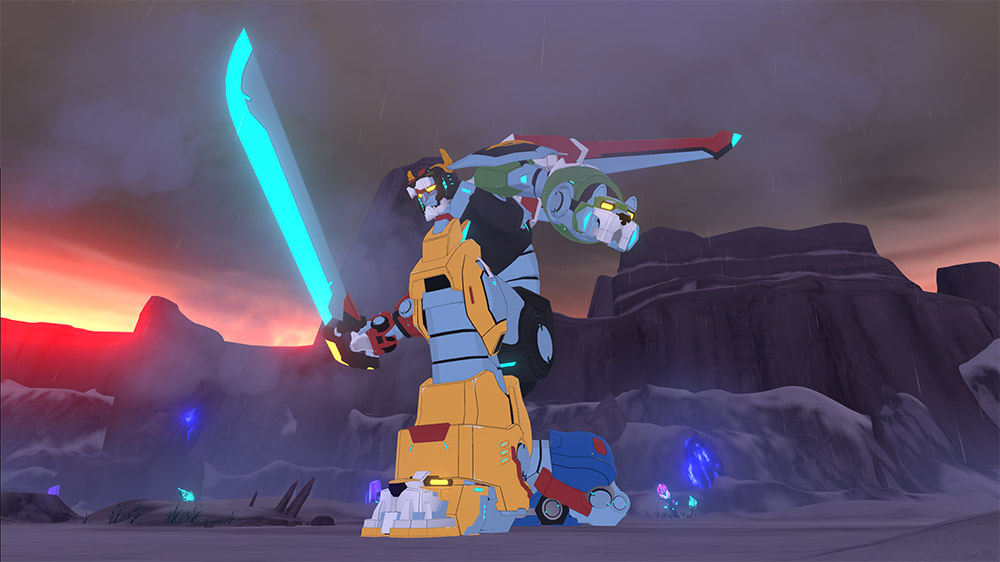 VR Chronicles certainly looks like the Voltron TV show. Did you use assets directly from the animation team, or did you recreate things?

Aside from Voltron itself and the five Lions (which were modified from the show models for VR) all of the remaining assets you see in DreamWorks Voltron VR Chronicles were built by our very talented team of artists and modelers, who took great care to make sure that all of the visuals felt as close to the show as possible.

Everyone on the team who worked on the project is a massive Voltron fan, which I think is clear when you compare the VR experience to DreamWorks’ Voltron: Legendary Defender. From visuals, to animation and dialogue, we wanted to make this the best Voltron experience possible.

Did you work with the original voice cast? If so, who will we hear from?

Right from the start, we knew that we wanted to get everyone from DreamWorks’ Voltron: Legendary Defender involved with the VR experience, and luckily for us DreamWorks said ‘Yes’.

So that means all of your favorite characters are going to sound just like they do on the show, from all of the five Paladins (Lance, Keith, Pidge, Shiro and Hunk) to Princess Allura and Coran, and even the villainous Haggar and Zarkon (and trust me when I say, you haven’t experienced the indomitable presence of Zarkon till he’s looming over you in VR). 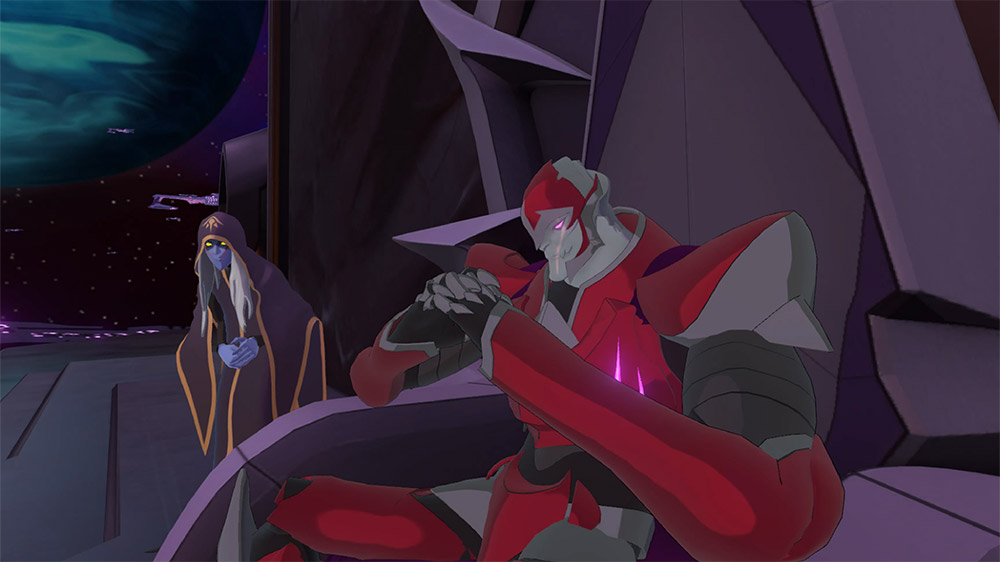 If you’re a fan of the TV show, will you find any ‘Easter Eggs’ or references that casual fans might miss? Does it relate to any plotlines or characters from the show?

DreamWorks Voltron VR Chronicles is set loosely in the second season of DreamWorks’ Voltron: Legendary Defender, and acts as a side story for all of our characters. We don’t reference any major plotlines from the show itself, so even if you’ve never watched an episode of the show, you can jump in and enjoy it.

However, if you really know your Voltron lore, then there are some very deliberate character moments and dialogue that you should be able to pick up on, along with a brief character cameo from the show.

We’ve also gone to great lengths to recreate as many of the small visual details as possible from the iconic locations, so whether you’re standing inside the Blue Lion cockpit or on the bridge of the Castle of Lions, there’s always something to see no matter where you look.

Voltron originated in the 1980s, when VR technology like we have now was (almost) purely science fiction. How does it feel to present a futuristic show like Voltron in a ‘sci-fi medium’?

Quite simply, Voltron is a perfect source of material for VR, and has allowed us to really showcase what the medium can offer.

Standing next to a gigantic, robotic lion (not to mention Voltron itself) for the first time is quite simply AMAZING, and the visual style of the show has transitioned almost seamlessly over into the experience, creating visuals that really pop with incredible color and depth.

The show has also given us leeway to feature a diverse selection of visually striking sci-fi environments, allowing our artists to really flex their creative muscles with alien worlds and dramatic space battle vistas. 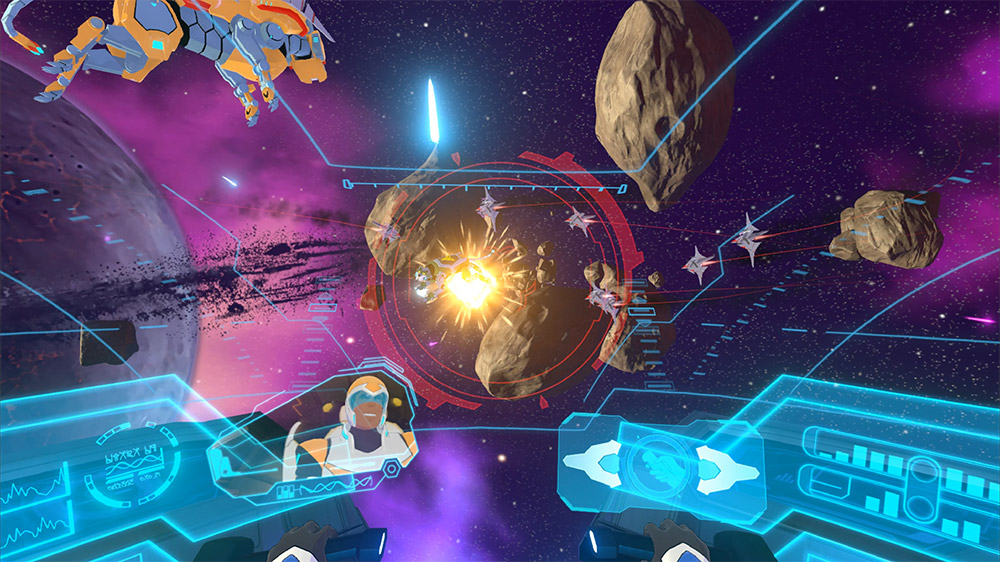 Finally, is it required that players supply their own ‘pew pew’ noises (as in the trailer above) or is that optional?

While it is not required (Lance handles the ‘Pew Pew’ quite admirably, after all) we have found in testing that it is extremely rare for people playing not to ‘Pew Pew’ as they blast Galra fighters out of the air as they pilot the Blue Lion!

Thanks for talking with us, Dan!