With an attraction as grand as Hyperdeck, you need the right VR system to match. 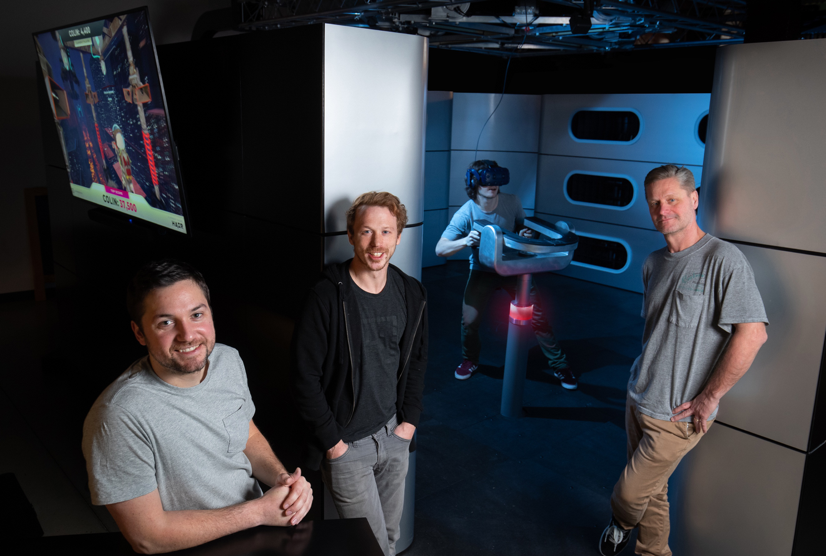 From left to right: Mike Bridgman, Sean Hennessey, Colin Schultz, and Jay Miller. Bridgman is the co-founder of MajorMega, the company behind a new VR attraction called the “Hyperdeck.” We met him at the 2018 IAAPA Expo in Orlando, FL where the Hyperdeck was first unveiled to great praise—one industry veteran dubbed it “the Void on steroids”

What is the Hyperdeck?

The Hyperdeck is a four-player VR ride with intense environmental simulation. It combines a full-motion platform, hurricane winds, instant heat, and interactive controllers to create an unparalleled immersive experience.

Our debut experience is full of great examples: you feel real 75 MPH wind as you soar through a city in the open air; you feel the ground shake as you drop 100 feet onto a moving truck; you feel the truck suspension recoiling from explosions as you fend off killer AI cars; I could say more but I want to keep some surprises!

Sounds intense! What about motion sickness?

Well, I can safely say we have eliminated motion sickness with our custom system that moves the floor in real time with the game to simulate the proper g-forces on your body. We’re also able to amplify certain motions and do some other neat things that trick the brain into feeling something you’re not actually experiencing. It’s our secret sauce we’ve been developing for almost three years now. When you combine that with wind, vibration, and some other tricks, the level of immersion is incredible. So far, after thousands of players, we’ve had zero reports of motion sickness.

What made you choose the VIVE Pro?

We started with the original VIVE and loved everything about it. The deluxe head strap enabled us to quickly get players comfortable with a simple twist, the integrated headphones sounded great and simplified our setup, and the lighthouse tracking was perfect, even with four players in a small area.

The VIVE Pro improved everything. On top of making a lighter and more comfortable design, the increased pixel density allowed us to do more with text and bring out more detail than ever in our games. And with the 2.0 SteamVR™ Tracking, we’re able to use four lighthouses to make sure every square inch of our play area is covered.

The controllers look interesting—how did you arrive at that design?

Well, we knew early on that people would lose their balance if we didn’t provide some kind of railing for stabilization—the idea to make that a controller was obvious from the start. My partner Sean Hennessey “MacGyvered” the first “Hardware Store” version from threaded steel pipe. We attached VIVE Controllers and a VIVE Tracker to it and it ended up working really well; people could stabilize themselves, but also feel like they were holding onto this supermassive object. 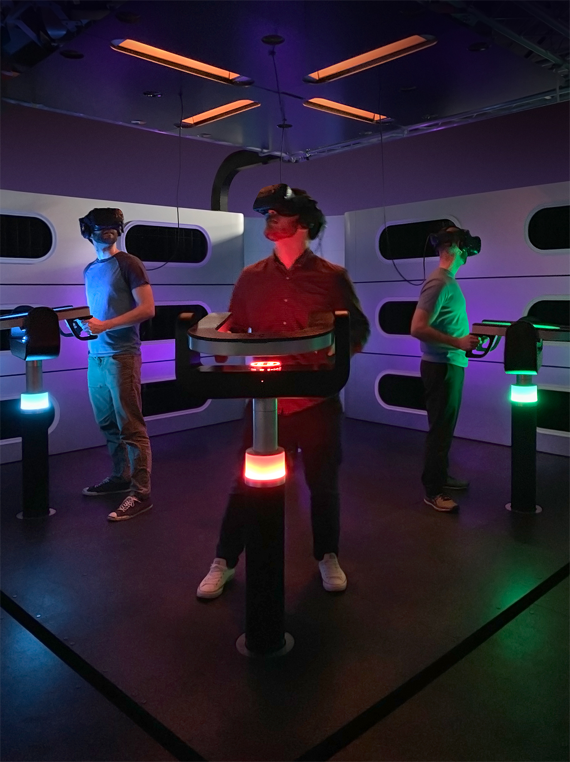 Our latest controller is jam-packed with tech. Each will automatically adjust height to fit the player, powerful recoil and vibration provide intense feedback, dynamic tension allows us to simulate a change in weight—switching from a machine gun to rocket launcher, for instance—and finally, hand sensors allow us to stop the motion floor if a player were to let go.

And the iPads mounted outside the Hyperdeck, are they for interacting somehow?

Yes precisely, our “Spectator Play” feature allows people standing outside the Hyperdeck to interact with the players in the game. They have the ability to target a specific player and create helpful or hurtful situations. It’s great for people waiting in line, or the person that couldn’t play in VR but still wants to take part in the experience.

Can you tell us more about your launch title?

The game is called H.A.I.R., which stands for Hoopers Artificial Intelligence Research. It tells the story of Harold Hooper, a washed up 80s rock star. To combat writer’s block, he invents a super powerful A.I. to write the ultimate metal riff, but when he fuses it with his body and releases it out of his lab…well you’ll have to see what happens. I can tell you it’s totally metal!

Sounds fun! What does the future look like for MajorMega and the Hyperdeck?

We’re currently in negotiations with a theme park, some family entertainment centers, and the largest athletic center in North America! We’re also working with some major brands to create custom experiences on a level they’ve never done before.

We truly believe the Hyperdeck is the “arcade of the future” and we want to see one in every major city (and town!) in the U.S. and beyond.