In April, we launched Viveport Infinity. The world’s first VR subscription service, we upgraded our model to give members unlimited access to all titles in our Infinity library. With Infinity, you now have the ability to explore hundreds of games, apps and videos in the quest to discover your favorite VR content.

But the engine of our success this year can all be attributed to our developer partners and their amazing content. We added over 100 titles to the Infinity catalog in 2019! To celebrate such a banner year, here are the most played Infinity titles of 2019: 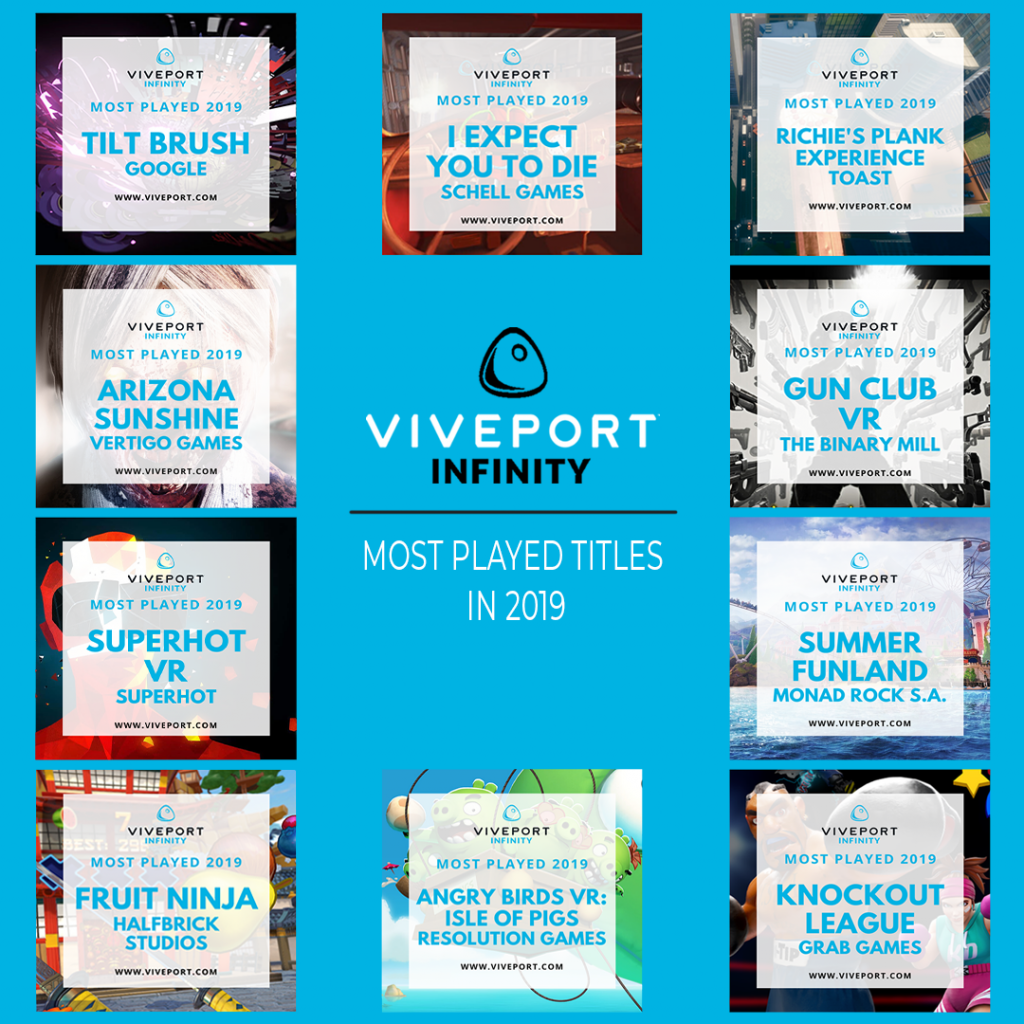 At Viveport, our passion is VR. Here are some of our own favorite titles to play that launched this year in Viveport Infinity:

“The secret to the game’s success is the brilliant fluid VR design and super thoughtful and accessible controls. The simple and non-intrusive control design is difficult to pull off, but this is where IEYTD excels. Even a VR novice will have no issues getting immersed in the clever puzzles, as the real world fades away while you play.” – Bjorn Book-Larsson, VP and Head of Viveport

“This is definitely my favorite music game in Infinity. Cruising along a neon highway and matched to an awesome synth-wave soundtrack, you hit targets and glide along waves. There are quite a few tracks by some of the greatest synth artists out there making it easy to get lost for a couple hours at a time.” – Ryan Goddard, Viveport Community

“I love the arcade combat and intensity of ‘Ninja Legends’. It’s very satisfying to take down the unrelenting forces of ninja enemies and pull it off without taking a single hit. It made me feel a bit like Uma Thurman in Kill Bill. There’s plenty to keep you playing with a good variety of stages, settings and difficulties to choose from.” – Angela Song, Viveport Marketing

“One of the world’s most recognized gaming IPs finally came to VR and in a terrific (terrifying) collection. I’m amazed by the amount of content that is available in ‘Five Nights at Freddy’s VR: Help Wanted’. There are scenes and levels from 5 of the classic titles as well as original mini-games with the killer animatronics like Freddy and Foxy. A great option for Grandpa’s first time in VR if you are a nice grandson like me.” – Thomas Gratz, Viveport Marketing

Rest in Pieces by Storming Tech

If you haven’t tried any of these favorites, make sure to check them out with Viveport Infinity!