To start, we have six new titles already lined up to hit your library this upcoming month. Make sure to check out Jon Favreau’s Gnomes and Goblins when it comes to Infinity in November and the VIVE Art’s title, Curios Alice, which will be exhibited at the Victoria and Albert Museum in London in 2021 but is available to experience today with Infinity.

On top of new Infinity content, Viveport is also hosting experiences from the Raindance Immersive film festival from October 28th– November 15th. The festival is partnering with Viveport and the social platform VRChat for this year’s special virtual edition of Raindance Immersive. Viveport is proud to host 20 VR games and experiences that are competing across 10 award categories.

Let’s take a look at what is coming to Viveport Infinity in November: 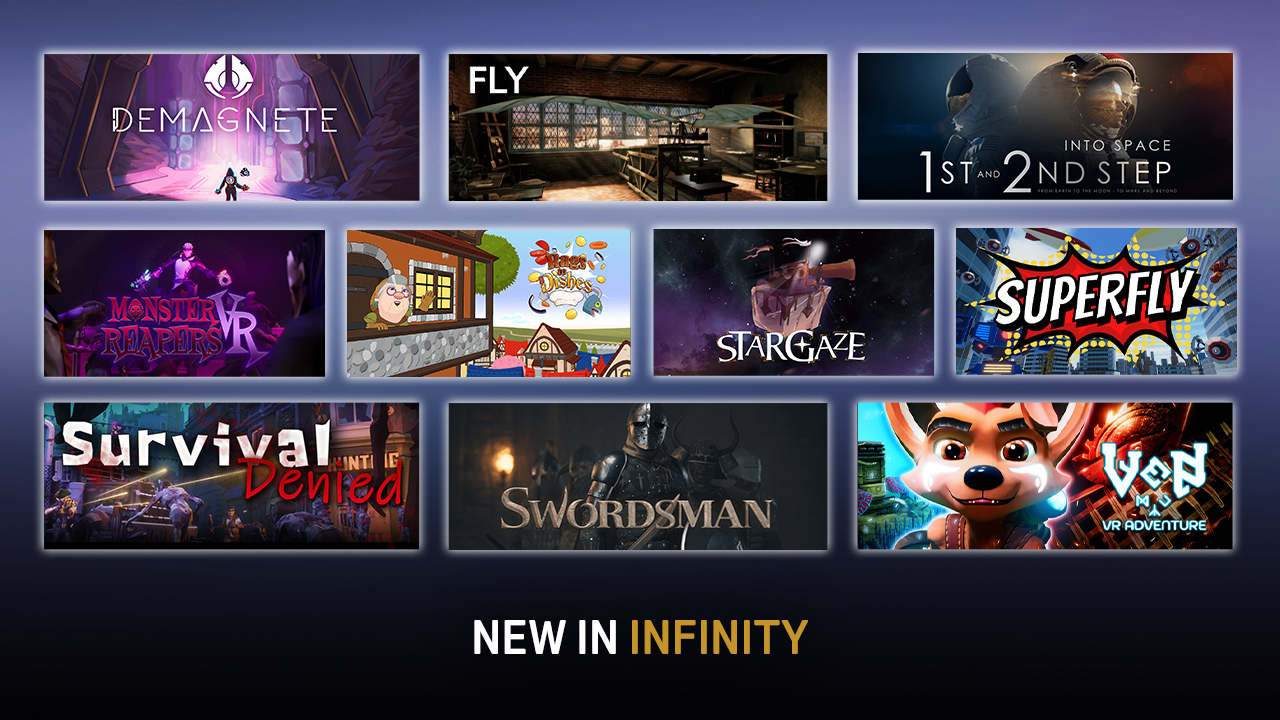 Embark on a dream-like journey in this fantasy adventure VR simulation. Encounter goblin inhabitants, become part of their society and save them from their foe. Freely roam the enchanted forest to discover deeper layers of their mysterious ways and reap the rewards of this magical world.

Ven VR Adventure is a single-player VR platform game. You happen to meet Ven on his unknown planet, invaded by Bruce Nelson, who wants to destroy the magical world.

As a Reaper sent out to hunt down monsters who have invaded the land, visit haunted locations filled with bats, ghosts and all sorts of strange beings. Discover ancient treasures to enhance your abilities and try to make it as far as possible.

Survival Denied is a casual zombie shooter, designed primarily with VR in mind. Made by gamers, for gamers! Wide choice of weapons, perks and power-ups make the game cool and re-playable. Dive in and try to survive as long as you can!

Observe the life and events of the curious planets by physically manipulating your telescope. Find the proper angles and perspective to uncover their secrets. Take photos and note down your observations to complete your book of research and solve the ultimate cosmic mystery … or just sit down and chill-out stargazing.

Rags to Dishes is a single-player, virtual reality (VR) cooking game set in a medieval kingdom! You’ll play as the chef, striving to reach the dizzying heights of catering to the royal family themselves! You’ll need to please both the masses and the monarchs to keep your kitchen running until the final level where you’ll have the chance to prove yourself to the King and Queen!

Check out some recent releases to the Viveport Infinity library you might have missed in October:

Curious Alice invites audiences to tumble down the rabbit hole and embark on a mind-bending trip into Wonderland through the playful dimension of virtual reality (VR). This new VR experience is the result of an innovative partnership between the Victoria and Albert Museum and HTC Vive Arts, featuring original artworks by Icelandic illustrator Kristjana S Williams. The experience presents a fully immersive, interactive re-imagining of Wonderland, celebrating one of the most iconic and inspiring stories of all time – the subject of the Victoria and Albert Museum’s major 2021 exhibition Alice: Curiouser and Curiouser.

In two intriguing Virtual Reality films, viewers set off for fascinating VR expeditions into space. They explore unknown worlds by visiting settings of the extraordinary richness of detail and authenticity – perfectly reconstructed in 3D on basis of original data from NASA and ESA – that convey a realistic sensation of how it must feel to actually be out in the open cosmos.

DeMagnete VR is a puzzle adventure inspired by magnetism, built from the ground up for virtual reality. Use your magnetic-powered gloves to solve puzzles and make your way to the top of a mysterious underground cavern. DeMagnete VR presents a variety of original magnetism mechanics that evolve with every chamber, as you find out more about what happened around you.

Superfly is an open-world action sandbox game where you play as a superhero who can switch between six different movement modes. Discover new forms of locomotion as you experiment with pairs of movement modes and explore the city any way you would like. Use each mode’s unique abilities to fight the army of robots invading the city.

Swordsman is a story-driven, physics-based medieval combat game designed for virtual reality. Experience combat where everything is physics-based, from weapons to bodies.

In the world of Swordsman, the Jötunn travels to Earth in an attempt to enslave all of humanity. He has recruited captains from all over the world, giving them godly weapons with which to command powerful armies. He wields seemingly infinite power: Hellfire. The game features Knights, Vikings, Mongols, Samurai, epic boss fights and powerful boss weapons, player progression and customization, a Blacksmith, Armorer and Skill Master to help you build a character suited to your playstyle and lots of items to buy and unlock, all in effort to stop the Jötunn before it’s too late.

From a multiple award-winning VR team and Oscar-winning special effects team, Fly enables you to become a time-travelling pilot – from the earliest imaginings of Leonardo da Vinci and his ornithopter, to the Wright Brothers’ success on Kitty Hawk Beach and, ultimately, into one potential future of flight.

That’s it for this month’s Viveport Infinity guide! Follow @Viveport for updates on new releases and let us know your favorite new titles you’re playing.