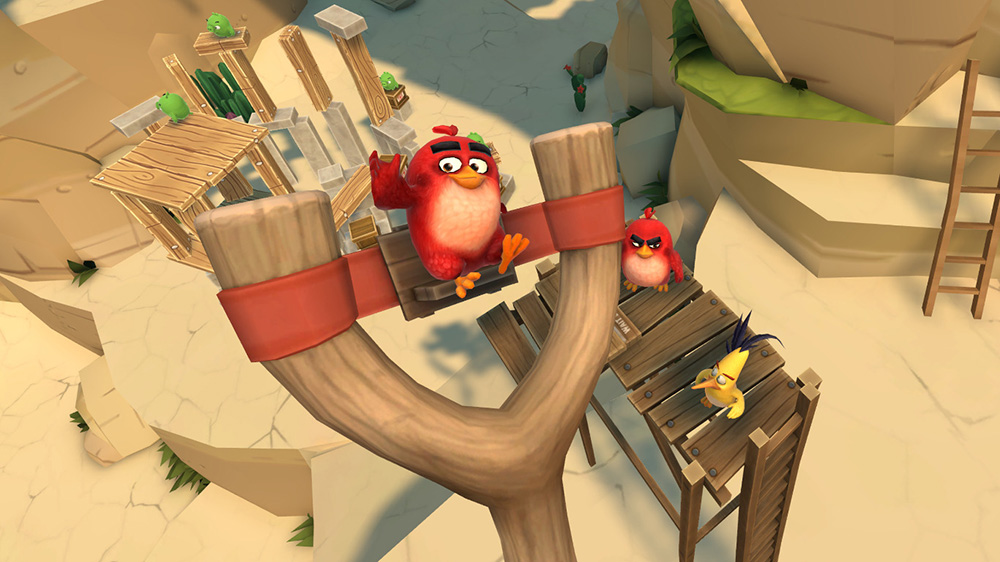 The global phenomenon Angry Birds from Rovio has been letting players fling disgruntled fowl at mischievous porcine foes for nearly a decade on mobile devices and game consoles. Now the developers at Resolution Games bring the addictive sling-shooting experience to VR with Angry Birds: Isle of Pigs, out now on Viveport and via Viveport Subscription. We spoke with the team behind this awesome addition to the Viveport Subscription library (for a total of 600 titles available to subscribers) to find out what went into bringing this modern classic to virtual reality.

For those unfamiliar, tell us a bit about yourself and the team at Resolution Games

The Angry Birds team is a small group within Resolution Games and we’re the youngest team in the company by age, so our colleagues always see an aura of optimism and energy around us. Our studio was one of the first to focus solely on creating experiences for VR platforms and it’s been really exciting to be in this space as it evolves and essentially paves the way for immersive gaming. That’s why our focus has been on creating both AR and VR games that everyone can enjoy, with gameplay, unique characters, social components and storylines that resonate with gamers and non-gamers alike.

We collaborated with Rovio on an AR game previously, but had to actually prototype that game in VR first. As soon as we had a playable build ready we knew that the IP and gameplay was perfect for VR. The characters are super engaging, the gameplay gets you moving around and who doesn’t like destroying things? Since then, we’ve been focused on making this come to life in VR. 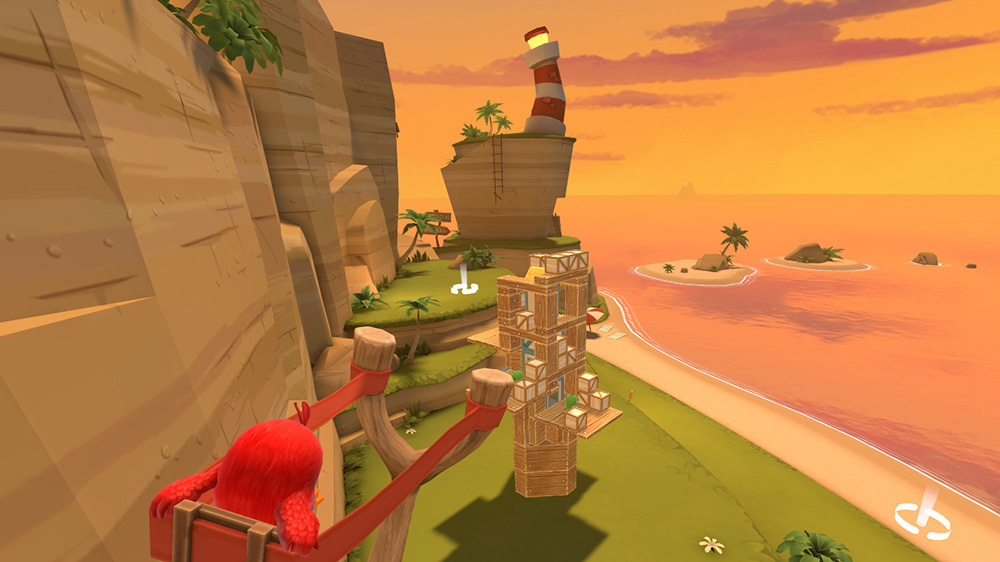 Rovio is very passionate about the Angry Birds franchise, and collaborating with them has been truly inspiring. We have a great relationship and have really appreciated their support during the development process.

Of course some of the game design was already set when we decided on making a slingshot game. We’d have Red and other well-known characters, as well as the well-known, physics-based gameplay. The challenge for us was how to transfer that into 3D, and not only that, a 3D game where the player can explore the levels in VR and shoot from different angles. After we made the first prototype, we saw that the classic Angry Birds gameplay transferred well to 3D and VR, while providing fans of the original game a whole new way to interact with it. Allowing the player to move locations throughout the game adds another dimension to gameplay. It’s been very exciting to help redefine how fans can engage with such a classic and beloved IP.

What was the process like crafting original characters set in the immensely popular Angry Birds universe?

The Angry Birds characters are legends in their own right, so this was an amazing opportunity for us to build on that and bring them to life in 3D. With VR, we can make them much more realistic for players and allow longtime fans to really engage with them one-on-one. For example, the birds interact and follow you throughout the game. They’ll wave, salute and encourage you as you play. We made sure to give every bird their own personal characteristics. For example, we added Bomb, the bird that explodes. It should be a welcome addition to the game for anyone who has played the original Angry Birds games. Everyone loves explosions, right? The same goes for the pigs, which are quite some characters. They’ll show a range of emotions; they laugh at you, taunt you, but also cower with fear when you’re shooting.

How has your experience developing games for mobile and social platforms as well as AR influenced the creative direction of Angry Birds: Isle of Pigs?

The company as a whole has vast experience from developing across several different game platforms and genre types. Our background comes from mobile, AAA and console games and with Resolution Games we’ve so far created games for all major VR platforms, mobile AR, head-mounted AR and more.

Experience with mobile devices has helped us build knowledge about how to create an accessible experience that players can get into quickly and have fun, as well as the technical knowledge to make a game look and sound amazing. The Magic Leap AR game that we made served as the basis for the game design, but we took an entirely new approach with the VR version t and made it a game that would be unique to the specific platform. With AR we were able to really build out that 3D gameplay and take the physics of the game to a new level. And, with VR’s inherent sense of presence and immersion we could make that experience even more engaging.

Were there any particular challenges in bringing the unique brand of slingshot focused arcade gameplay from the Angry Birds series to VR?

Making a 3D version of a 2D game is not always a good idea, but from the very earliest prototype, we could tell that it would work.

VR can be a challenge. Having your hands appear in a game makes it very intuitive to what you can do, but the game also has to meet those expectations. In Angry Birds VR: Isle of Pigs, you hold the slingshot in one hand while you use the other hand to pull the rubber band backwards. This feels natural, but we had to tweak the visual and audio feedback quite a bit before we got it right. We also wanted to push users to move around the levels and look around for points of weakness so we integrated design elements to help guide that process.

You previously developed Angry Birds: First Person Slingshot for AR. Could you speak a bit about your thoughts regarding the unique opportunities and challenges in developing for AR vs VR?

We saw how well the gameplay worked in VR when we worked on the Magic Leap version. As we didn’t yet have a Magic Leap headset, the first version we made used a VR headset to simulate AR. So it was natural to make a VR version once we were done with the AR version.

For the Magic Leap AR version, we discussed different ways we could use the Angry Birds characters, structures and the world in a way it could naturally fit in someone’s environment – like their room, a living room or kitchen even. We thought about it as something that would be tangible and right in front of you, but also a part of their environment. We then expanded on that thinking to include the limitless possibilities of augmented reality gameplay and visuals to give players an experience they could never have on a 2D screen or in the real world.

VR, however, provides players a more immersive experience. Players are totally immersed in the Angry Birds world. To build a stunning environment that enhances the presence in VR is super important and was also a challenge for us. Another difference between AR and VR is the mobility. Our player research indicates players love to walk around in AR because they can see the real environment and know where they are. In VR, players get more concerned when they start moving around. In Angry Birds VR: Isle of Pigs, we provide different teleportation points around the level to enable players’ movement through the large distance while players can also move in the small area around one teleportation point.

Were there any particular features, ideas, levels etc that you wanted to work into the game that just didn’t find the right place and had to be left on the cutting room floor?

We hope to bring more characters to the game since all the characters in the Angry Birds universe are unique and have their own personalities. We would also like to add more kinds of blocks and features in the level, like the gravity blocks, portals, umbrellas, etc. We’re also experimenting with other elements to make the gameplay much deeper and engaging and hope to continue building the game out further.

Who’s your favorite bird? (there are no wrong answers haha)

We started a poll in the team and Bomb became the favorite bird in the game. He has a cool voice and his ability to explode before, during or after impact is the most rewarding. He’s also fun and tends to cause the most destruction in the game.

Have there been any particular bits of feedback from players so far that surprised you?

Our players gave us a lot of nice feedback in our previous play tests, and we have iterated the gameplay based on that to make the game better. The most interesting feedback was given to us at the beginning of the project. At that time, players would shoot a bird to different teleportation points to teleport. We expected players to master the teleportation easily because of the same mechanics as the gameplay. However, most players thought it was not that intuitive because it’s not their direct reaction when it comes to teleporting and they were afraid of losing a bird. After we changed the mechanics to point and click, most of the players learned the action very quickly even without the tutorial. We love to listen to our players and look forward to garnering more insights once the game is released.

How many people were on your team during the development, and how long did it take?

This has been a true team effort and has involved a lot of people with different skills from the entire company. At least half of the studio has been involved in one way or another. We have a short development period for the VR version. In total, it took us about four months. But, we plan to put more months of work into adding new levels and gameplay ongoing.

Could you share any hints as to what kind of exciting content is on the horizon for Angry Birds VR: Isle of Pigs?

We’re experimenting with all kinds of ways to make this game more expansive and better. Stay tuned for more levels.

What’s next for Resolution Games?

A ton… but isn’t that what’s so exciting about this space? There’s more to come on the near horizon as far as creating more games for VR, AR and standalone. But more than that, we’re very interested in social VR and how we can create further game engagement through having players interact with each other. We’re also working towards other game genres. It’s all about experimenting with the platforms and technology to create the best games for players.

Great to hear! We’ll definitely keep an eye out for what’s next from you and the team. Thank you for speaking to us!

Angry Birds VR: Isle of Pigs is now available on Viveport and as part of Viveport Subscription.