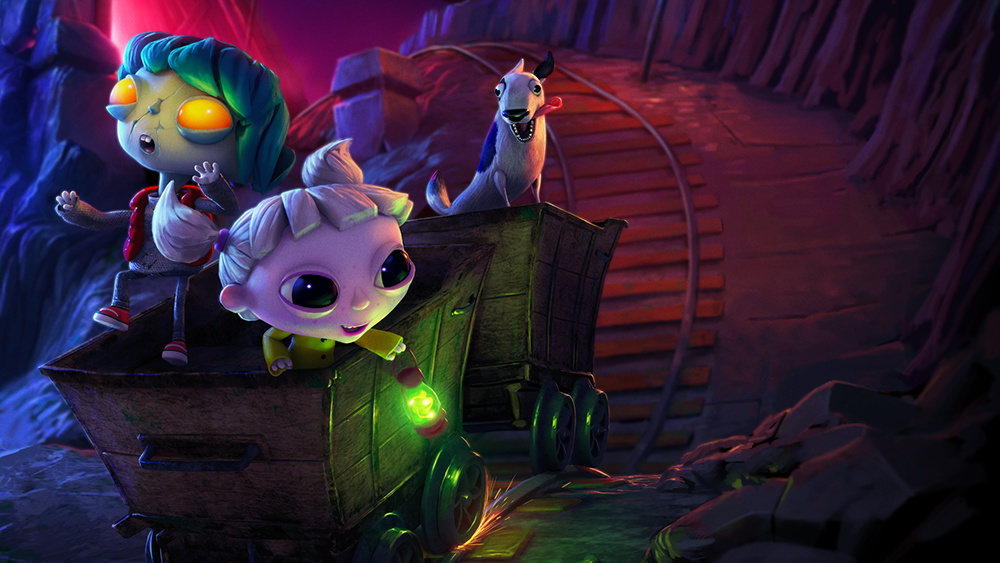 The third and final chapter of the charming and heartfelt animated experience Gloomy Eyes is now available exclusively on Viveport Infinity. Narrated by Colin Farrell, it tells the heartwarming yet bittersweet story of star crossed young love that transcends life and death. With wonderfully expressive animation and innovative VR enabled storytelling techniques, it will make you smile as much as it will bring a tear to your eyes (be sure to wipe down those lenses after).

We sat down to chat with the team behind this award winning tale to learn what inspired them to craft this stylish VR yarn.

Jorge Tereso / Director: We’ve been working together for many years and we have always prioritized pleasure and enjoyment of the day to day process that is doing animation.

Fernando Maldonado / Director: For many years we worked with different clients but we’ve always kept our sacred fire, a kind of engine that encouraged us to go for our own goals and content. These was a key motivation for our artistic concerns. What we do is a result of a very hard work and allowing us to play, up to the end, to move forward to the point we really want to reach. This freedom and playful spirit made us achieve many important goals. The whole team play this game, have fun and help us to get to  incredible results, probably that we couldn’t reach by our own.

Gloomy Eyes tells a story of a world circa 1980s where humans and the undead attempt to live side by side – relatively unsuccessfully. What were the main sources of inspiration on this nostalgic, fantastical tale of young love blooming among the darkness?

Fernando: We wanted to create a timeless universe, not that recognizable, where magic can have it’s space.

Jorge: The inspiration is the entire world, I mean, when you see what really happens around us, people that get divided, people that point to each other, playing blame games. Creating imaginary enemies, monsters -or a zombie –  just to deny the inner zombie we all have inside. 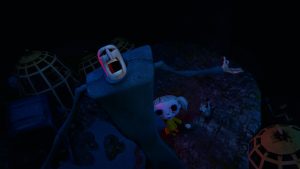 The Gloomy Eyes experience is as vibrant to behold as it is heartwarming and silly – twisty dioramas depicting the character’s world that rotates and morphs as scenes bleed into each other as the story unfolds. Talk a bit about the design process and how it differs from traditional animation or even other VR experiences.

Jorge: One of the differences may be that we’re really focused delimiting the information that the audience receives. The canvas in VR is limitless and it’s very common to overwhelm the audience with countless stimulations. What we aim to do is looking for boundaries among this canvas, and  keep the focus in the story, offering a narrative experience that can get to the audience. This made us reach to two fundamental points, the floating islands stages and theatrical lighting.

Fernando: At the same time, there is an endless, infinite world within those worlds that we create. They are tiny universes with plenty of details to observe and to get immersed with. Our proposal is to go around the stages and the story, to spy on the characters. We get to a new plane of immersion.

Although there is awareness of the physical presence in that world, the user wins a state of anonymity, depersonalization. and the story becomes the real protagonist.

The sensoriality of the VR is our true engine. It is a physical sensation that does not exist in other audiovisual media.  We went deep with the desire to grasp things, to feel them. From touch. To find a melancholic emotionality.

This quirky and emotional narrative is further brought to life by the voice of Colin Farrell. Talk a bit about how this collaboration came to be, and what the process was like working with him to record his performance?

Fernando: We realized that a guide in this world could enhance and help to understand the poetics of the tale. The first step was to think who we wanted to tell us the story. We didn’t want an omnipresent god, we preferred to think of him as a character, who had the authority to tell a story about the dead and the living. So first came the character of Gravekeeper, who had things to say and could tell us things about the story that maybe we didn’t even know. We began to think of names of actors who fit the character, who have something dark but have a lot of sensitivity.

Jorge: That’s how Collin showed up. We had seen The Lobster, we loved it. We asked him to create a character that was close, to tell the story as if he was telling it to a friend. He really exceeded our expectations. We loved his work from the first to the last sentence. We understood why he is where he is, he’s a genius. He was able to give life and exalt the character. Working with him was very pleasant.

Have there been any particular design challenges that your team encountered that you didn’t expect? 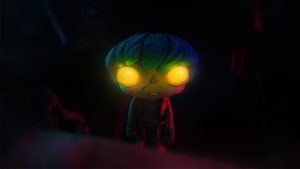 Fernando: I think that understanding the platform was the main point to dare here. To capture attention and bring the focus to different places, in a platform that is supposed to be infinite. Doing these without cutting off freedom was really a challenge. We also realized that classic methods -such as storyboard-  that are useful in a typical pipeline, were pointless here. We didn’t have the same result, they weren’t useful to our creative process at all.

Jorge: Maybe it wasn’t so much encountering problems but understanding that it was a constant search with the certain clue that everything could always be improved. Magic appears when you explore an unexplored space. New things and discoveries appear during the process, maybe without consciously looking for them. They simply appear.

Fernando: Finding simplicity was the key, and sometimes it became difficult.

How did your experience creating animated shorts influence the creative direction of Gloomy Eyes?

Fernando: Is very common to need a sort of guide to see VR, somebody to tell you where to stand or where to look. Here the story is the guide, we tried to make an intuitive content, even for children. In fact, despite having a language selector, there are no texts in the experience. It’s an experience ready to dive in, to feel.

Jorge: We hope that these platforms reach as many people as possible, we are very excited to be part of it. 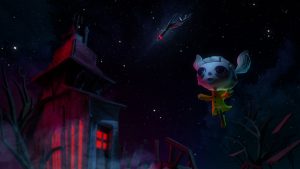 Gloomy Eyes has received numerous accolades at festivals around the world, bringing home multiple awards such as the SXSW Jury Award for Storytelling and ‘Best VR Experience’ at the Annecy International Animation Film Festival. How does it feel to get such positive response from film and animation circles with an immersive VR series?

Jorge: It was a very nice surprise. Our first idea was to tell a good story in a very new landscape. To be honest we didn’t know what to expect, but traveling around the world showing our episodes wasn’t part of the initial plan.  What we treasure most and feel proud of is having the courage to make this leap into the void in a totally new and unexplored medium for us. It feels really good.

Fernando:  Imaging that we could tell something sensitive within VR, being able to show a story in different cultures and understanding  that a unique sensitivity can be achieved, it’s really graceful.

Have there been any particular bits of feedback from these festival screenings that have surprised you?

Jorge: Every time somebody watches Gloomy Eyes we get surprised. I remember the first time we showed it, it was a prototype in Paris. There was a woman watching the experience, and once she took off the headset we could see tears in her eyes.  At first we thought that maybe something in the experience affected her sight, but then she told us that the story moved her, she was really touched by Gloomy Eyes. That was the moment we realized that we were telling a story that could reach people’s hearts. That moment was decisive and marked the following steps. That’s why we always try to honor the emotional content of the whole experience.

Fernando: Yes, the truth is that until that moment everything we were working on was more like a thriller, we were very influenced by the infinite possibilities of VR, adrenaline, impact, effects. But that day we realized that the most powerful thing about Gloomy Eyes was the emotion brought by a simple story of two kids that dare to play with love. That definitely led our way.

The feedback we received so far is always from a place of sensitivity, beyond the technological and innovative medium, this is what we value the most. 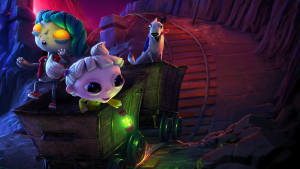 Jorge: I think emotions happen in the body, but when we put on the headset there’s a disconnection. Having the headset on doesn’t allow us to see our own body. Something that can greatly change the physical experience of VR is to be able to see ourselves during the VR experience, to perceive ourselves as part of what we’re watching, not as an invisible spy. We have no doubt that it will evolve in many different directions and it will blow our minds every year.

Fernando: Yes, in the last two years the technology improved a lot and always towards different places, some that seem obvious and others that we didn’t expect, but with the headset’s improvements – lighter devices and wireless-  in addition to all the visual possibilities, the future is bright. There is also a really rich field in audio research. We hope it keeps on moving and enhance the VR experience as the latest visual developments.

Fernando: Yes, but it was occupying different spaces in our day to day.

Jorge: But honestly, we’ve been thinking about doing something like this for 10 years… Telling a story inside the 3d space, without a 2d screen in between. 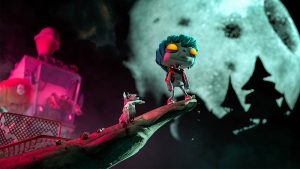 What do you ultimately want audiences to take away from their time with Gloomy Eyes?

Jorge: Nothing specific, the best thing that can happen to us is to receive a unique or strange interpretation from each different person.

Fernando: Yeah, we like  the surprise when someone gives you back a new point of view. Many times we think that ideas go to a certain place, and when we get an answer in another sense the exchange becomes very enriching. It’s something that completely fills us and makes Gloomy Eyes really alive.

Outside of the remaining two episodes of Gloomy Eyes, what’s next on the horizon for your studio?

Jorge & Fernando: Keep creating content and use enjoyment and passion for what we do as a compass to navigate the future. Desire and enjoyment rule, always.

We can’t wait to see what you and the team have cooking next! Thanks for chatting with us.

Check out all three episodes of Gloomy Eyes today, exclusively on Viveport Infinity!